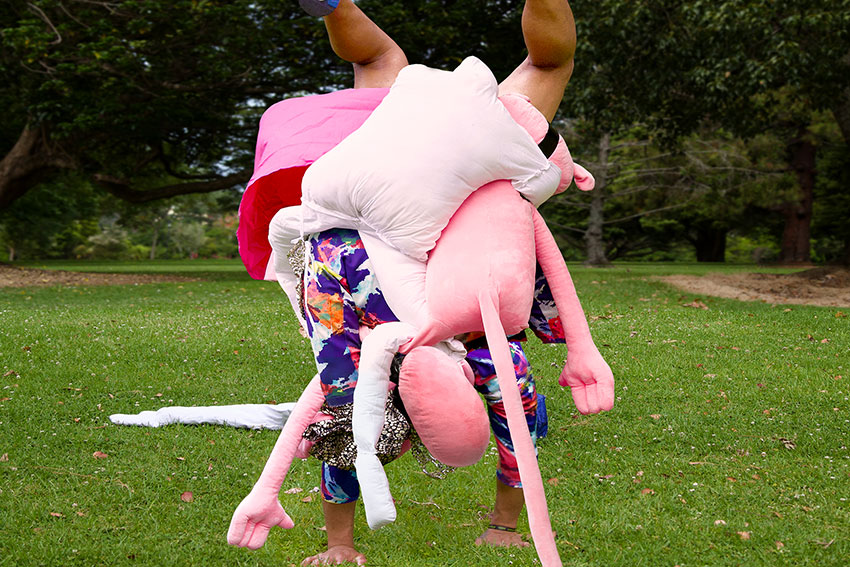 Waitangi Day falls in the middle of this year’s Auckland Pride Festival. Rather than being strange bedfellows in the summer cultural calendar, these events may be considered in terms of the historical contexts they share: confronting social oppression, and ongoing emancipatory struggles.

The signing of Te Tiriti o Waitangi / The Treaty of Waitangi in 1840 was followed by the roll out of homophobic British law in Aotearoa. The decades preceding the signing were marked by an oppressive regime for indigenous communities and queer lives. This negatively impacted the spiritual, socio-economic and cultural wellbeing of Māori, while LGBTQI+ people of all cultural backgrounds experienced fear of incarceration, hospitalisation or ostracisation. Although it has now been more than 30 years since homosexual law reform in Aotearoa, and despite increased social acceptance, discrimination and inherent biases are still realities in our legal, education and healthcare systems.

Waitangi Day and the Pride Festival continue to negotiate the complexities of being part memorial, part protest and part celebration (to some). It is the work of both to open up the possibilities for coalition across barriers of gender, race, religion, class and sexuality; to take up the challenge of acknowledging, recognising and upholding differences, while at the same time enabling unity. With this challenge sometimes comes conflict, both from outside and within our communities. These frictions don't necessarily need to be shied away from, however, or viewed as unproductive. For example, after the heated backlash against the banning of police uniforms that resulted (due to the subsequent withdrawal of corporate sponsorship) in the cancellation of the 2019 Pride Parade down Ponsonby Rd, this year we are seeing a record number of festival events, and new pools of funding.

Minority groups are often persecuted by the same dominant power structures, and furthermore, LGBTQI+ people come from and exist within all communities in Aotearoa, including Māori. Pride should honour Te Tiriti o Waitangi as a living document, and one that signifies living relationships. The implications of this include taking a stand alongside Māori on issues of ongoing institutional racism in the New Zealand Police Force or the land injustices highlighted at Ihumātao. An empathetic allegiance between Waitangi Day and the Auckland Pride Festival has the potential of collective empowerment.

Te Tiriti o Waitangi may be read as holding the desire for different groups of people to form a peaceful and mutually beneficial partnership. It opened the doors for my ancestors to migrate from Europe, with the hope of creating a better life here in the South Pacific. At the same time, it can’t be denied that the colonial project itself enacted a fast-paced and violent reimagining, reforming and renaming of Aotearoa, resulting in the transfer of political and economic power into the hands of the British Empire.

New Zealand’s history exposes the criminalisation of homosexuality that was part of the globalised British colonial legacy. Human rights activist and lawyer Ritchie Maitland calls to attention that the 1860s penal code was laid out with a colonial moral mission in mind, intended to protect Christians from ‘corruption’ and to ‘Christianise’ indigenous practices and ways of being. Maitland points out that of the nine countries in the Pacific where homosexuality remains illegal, eight are former British colonies. Debate about the decriminalisation of homosexuality is presently playing out in Kūki ‘Āirani, the Cook Islands. Although self-governed, Cook Islanders are New Zealand citizens. In contrast, laws against same-sex sexual activity have never existed in French Polynesia.

The British laws that arrived with colonisation created a social stigma around same-sex relationships that Māori scholars (and activists?) such as Alison Laurie, Elizabeth Kerekere and Ngahuia Te Awekotuku say did not exist before in Aotearoa, suggesting that Māori were historically more openly accepting of gender and sexual fluidity; as Kerekere writes in her PhD research, takatāpui have always been just “part of the whānau”. Along with the Māori scholars and activists mentioned above, Māori have long been at the forefront of Rainbow visibility in this country, from cultural icons to politicians, including Carmen Rupe, Mika Haka, Witi Ihimaera, Georgina Beyer and Louisa Wall. Furthermore, it was Te Awekotuku’s fiery speech in the Auckland University quad in 1972 that started the Gay Liberation Movement and Protest in Albert Park that this year's Pride Festival is celebrating.

Additionally, the historical accounts mentioned above, of an open and accepting view of gender and sexual diversity held by Māori, offer all LGBTQI+ people a powerful alternative to the more familiar colonising narratives of persecution. Gender and sexually diverse people have been here as long as people have walked along these shores; these are histories that offer hope, inclusion, connection and, importantly, are rooted in the place where we stand.

AUT PhD student and artist Richard Orjis is curating an art exhibition ‘The Queer Pavilion’ on the first week of Pride month Feb, at Albert Park, the site of the first Gay Liberation protests in NZ (1972).

The Queer Pavilion is a drifting structure of art, performance and conversation for this year’s Auckland Pride Festival. The Queer Pavilion takes place from February the 1-7th in Albert Park, the site of New Zealand’s first public Gay Liberation protest in 1972.

Richard Orjis is a pākehā artist and educator based in Tāmaki Makaurau. His work investigates queer histories and perspectives in art and ecology, through site-oriented and collaborative artworks and exhibitions

Study Art and Design at AUT

This opinion piece was first published by The Spinoff on January 30, 2020. Read the original article here.