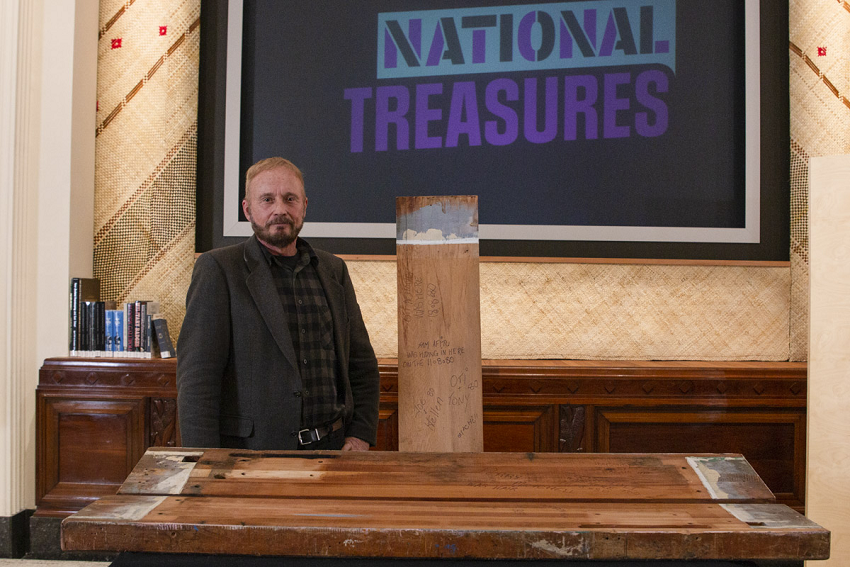 Professor Welby Ings from the School of Art and Design writes about what it was like being a teacher during the Dawn Raids era and beyond, in an opinion piece for E-Tangata. Read the original article.

It was a late autumn morning in Ōtara. At Mayfield Primary, sunlight cut through the trees surrounding the playground.

This was the mid-1970s and I’d been sent to the school to be “pulled into line” by a junior school principal, whose reputation for sorting out uppity beginning teachers had reached legendary proportions.

There was a reason for this. The year before, I had affronted the sensibilities of a senior district inspector by suggesting that New Zealand’s assessment of literacy might be unfair, because testing was based solely on English language skills. It didn’t matter how elegantly a bilingual child could translate, pun, or navigate between languages — this counted for nothing. Literacy was measured by a strict colonial ruler.

Forty years later, nothing much has changed.

Although measuring kids who spoke Tongan or Sāmoan and English, by testing their ability to read books like The Sweet Porridge was an issue, this kind of racism nestled behind other events that were happening at the time.

Between 1974 and 1976, specific parts of the country were experiencing state-sanctioned dawn raids on Pacific Islanders, suspected of overstaying their visas.

At schools like Mayfield Primary, we learned of the arrests from frightened kids who came into our classrooms, wide-eyed and anxious. They talked about special police squads raiding homes and workplaces. They’d heard of church and prayer meetings disrupted, and family members taken away.

They knew from experience, that the banging on the door at 2 in the morning would be sudden because the police parked their cars down the street before they surrounded the house.

They told you how the officers came in pairs with dogs that sniffed out family members who were hiding in wardrobes or under houses. They told you about torchlights that shone in your eyes and people being shuffled into vans because they couldn’t produce passports.

This was not the realm of the Ready to Read books. There was no Sweet Porridge here. This was a world where kids got swept up in fear and confusion.

At the time, I think, few New Zealanders realised how selective the Dawn Raids were. Pacific Islanders comprised only one-third of the country’s overstayers, but they represented more than 86 percent of those arrested and prosecuted. The majority of visitors abusing the terms of their visas at the time, were from Australia, Britain, America, and South Africa.

But at Mayfield Primary on the morning in question, our focus had shifted to something prosaic. When we rolled up to the staffroom, we found a policeman waiting outside.

Over the weekend, some of our classrooms had been broken into. This was not an uncommon occurrence, but the officer had been invited in, to talk to us about security. He was given a cup of tea and a welcome, and during his address everybody listened politely to his advice. We were told not to leave our cars at school after 4pm and to take all valuables home each weekend.

When the officer finished, the junior school principal thanked him and informed us that the constable would be visiting each of our classes in turn to talk with the children. We glanced uneasily at each other. In Ōtara at this time, tensions between the police and Pacific Island families were running high.

When a few of us tentatively suggested putting the class visits off until another time, the temperature in the staffroom dropped five degrees. With a titanium smile directed at the officer, the junior school principal carefully stated the times that he would be at our classes and explained that she would personally be there to introduce him.

When we left the staffroom, the door was locked behind us. This was a standard morning ritual because we were told that the children at the school couldn’t be trusted not to steal the biscuits from the fridge.

Because we were uncertificated junior teachers, we did what we were told. The officer spoke to each of our classes, and the kids sat there wide-eyed and frightened.

I remember one of my boys started crying and asked why the constable had taken his cousin away. In consternation, he explained that he hadn’t, but it was no good. To help retrieve the situation, he took the class outside to see his bright new police car and he offered to give them a ride in it. There were no takers.

Although the historical accounts of the Dawn Raids suggest that this world came to an end after 1976, the monitoring and deportation of Pacific peoples extended well into the following decade. This became a silent part of the story that occurred after the Muldoon government formally closed the initiative down, noting that deporting Pacific Island overstayers had not served to resuscitate New Zealand’s flagging economy.

I didn’t see out the year at Mayfield Primary. I resigned because I didn’t know how to handle the moral dilemmas that teaching presented.

However, by a circuitous route, 10 years later, I found myself drawn back to the profession when I picked up a job at Seddon High School in central Auckland working as a relieving woodwork teacher.

It was here that a related issue surfaced. I had begun teaching a class comprising largely of Tongan boys who had come to New Zealand for one year to complete their School Certificate. These were good kids, frightened of machinery but expert carvers and naturally disposed to working on each other’s projects. They made up the vanguard of the School’s first XV.

It also appears that some of them were here illegally. I’m not sure how this happened. In truth, I didn’t ask. They told me how important it was that they “pass” their School Certificate and how their families back home had invested everything they could, to give them this one great opportunity to advance their education.

In addition to this, I also discovered that these kids knew how to hide.

Initially, they showed me cubbyholes under the workbenches. Tucking themselves inside these spaces apparently had something to do with avoiding a previous teacher who’d been suddenly dismissed for using a piece of 4 by 2 for something more threatening than demonstrating a mortise and tenon joint.

But the kids also showed me another space under the classroom. This had an unexpected entry point.

Seddon High School had been constructed on an old dump and the land beneath the buildings was subsiding. This resulted in large spaces opening up under classrooms whose structures had been bolted onto poles, hammered deeply into rock below the landfill. A trapdoor beneath one of the lathes in the workshop now opened into a space where three or four people could stand.

The opening, I think, had originally been designed to afford internal access to timber stored under the building. However, as the land subsided, what remained of the original drying racks had collapsed into debris. It wasn’t the most attractive place on earth.

Because at this time immigration officers sometimes arrived at schools looking for students, a small number of teachers developed a discreet system of hustling vulnerable kids temporarily out of sight.

When a three-ring signal came through from the ladies in the main office, quietly, one or two students would slip through the trap door — and, when the immigration officers arrived, the class would continue working as normal.

The officers would make polite inquiries about absences and check the class roll (which was strategically left unmarked until the end of a lesson). About 10 minutes after they left, there would be another three rings on my phone and the hidden students would be helped back up into the classroom.

We didn’t talk a lot about this. Most teachers at the school weren’t aware of it and the kids knew that they were protecting their friends by not saying anything. In truth, although history may paint such actions as radical defiance, actually, it was just people looking after each other.

As teachers, we’re sometimes forced to think about the justice that resides above professional directives. I think this kind of justice has a human heart. It understands that beyond legislation and political expediency, we need to reach for compassion and fairness.

After 40 years of teaching, I know that such initiatives are not that uncommon. When kids trust you, they ask for help. They talk with you about things like avoiding family violence, accessing help with sexual health issues, or removing tattoos pricked onto the back of their hands in moments of anger.

They approach you because they sense a confidential kind of care. I’ve seen such care exercised by many teachers, and it’s why I have such deep respect for compassion in the profession.

Actually, it wasn’t until decades after we’d all left the school that the trapdoor incident surfaced. When construction workers were tearing down the workshop, they found kids’ names and dates scrawled underneath slabs of timber. Some of the writing predated my arrival so it might not be evidence of avoiding immigration searches. But the writing under the floorboards was from the time I taught there.

These names and dates written in hiding places, contribute to a network of survival stories that show another side to the Dawn Raids. Such stories are often small and unsanctioned. They surface in recollection and they are treated with discretion because they can still put people at risk of being considered unprofessional or involved in illegal initiatives.

When I think of such stories, I’m reminded of the observation often attributed to George Orwell:

The most effective way to destroy people is to deny and obliterate their own understanding of their history.

Although it appears that Orwell never actually wrote these words, it doesn’t diminish their value. Written histories are generally accounts of people who possess power — and because of this, they can be exclusive and uneven.

But histories of vulnerable people are often accessed in other ways. They leak out in family stories or in unpublished correspondence. They are told at school reunions and funerals, and sometimes they surface in quite unexpected places.

History, it appears, can be more than dated newspaper articles. It can be ephemeral, like frightened names and dates scrawled in a black felt tip pen, on the underside of a wooden floorboard.