The Day of the Dead in a pandemic 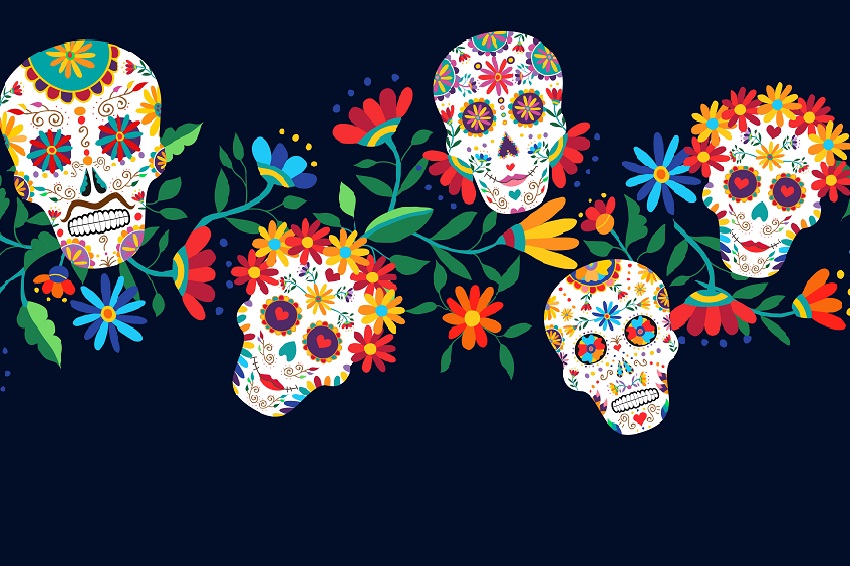 This article is republished from The Conversation under a Creative Commons license and written by Auckland University of Technology Professor of Popular Culture Lorna Piatti-Farnell. Read the original article.

In the time of the COVID-19 pandemic, when so many lives have been lost to the virus, celebrating a “day of the dead” might seem strange, even tactless. But despite the morbid associations of its name, the Day of the Dead is actually a time to be reminded of the beauty of life, rather than just the inevitability of death.

Part of an important season for most Christians that begins at the end of October, the day sits within the celebration of Allhallowtide. This three-day period comprises All Hallows’ Eve on October 31, All Saints’ Day on November 1, and All Souls’ Day on November 2.

The last one is particularly important for Catholics and is an official holiday in their ecclesiastic calendar. Also known as the Commemoration of the Dearly Departed and the Day of the Dead, All Souls’ Day is generally a day of remembrance, when prayers are said for the souls of those who have passed on.

Around the world, All Souls often involves visiting cemeteries where loved ones are buried, and tending to their graves. Attending a mass or church service, praying and eating particular foods are all part of these observations.

In Italy, for instance, one can eat the pan dei morti – literally, bread of the dead – a kind of chocolate biscuit filled with nuts. The biscuit represents the soil, and the nuts represent the bones of the departed. In a number of cultures, food is left out as an offering for the dead as a way of commemorating their lives.

While it is first and foremost a religious holiday, All Souls’ Day/The Day of the Dead has, as often happens, been incorporated into secular popular culture.

Most obviously, we see Day of the Dead motifs borrowed for secular Halloween celebrations – even if the two days within Allhallowtide have very different origins, iconographies and principles at their core.

Increasingly, though, it is the Mexican incarnation of the Day of the Dead that has taken hold of the popular imagination. Día de Muertos takes on special tones in Mexico and elsewhere in Latin America, as well as within Latino communities around the world.

Observed over the first two days of November, Día de Muertos is a time of both remembrance and celebration. But where All Souls can be a sombre occasion in other places, in Mexico it is a bright and colourful holiday, focused on celebrating the lives of those who have come before.

While Día de Muertos is certainly situated within Christian belief, it also mingles culturally and conceptually with Indigenous beliefs dating back before the Spanish invasion, where the celebration of “death as part of life” was central to religious systems.

An important part of Día de Muertos – which it shares with celebrations in other countries – is the belief that the dearly departed can return and visit the living during this time. Big family feasts and musical performances are held to welcome the spirits.

Altars known as ofrendas are set up for the dead, where their pictures are commonly displayed. You sometimes see the practice represented in popular culture, most recently in the 2017 animated film Coco.

The iconic “flower skull” is perhaps the most recognisable motif of Día de Muertos. You will find it printed on postcards, banners and clothing. It’s also common to see people dressed as “flower skeletons”, and to consume “sugar skull” confectionery.

The flower skull has been widely appropriated by popular culture around the world, even in countries geographically and culturally distant from Mexico. This undoubtedly owes a lot to the enduring popularity of Mexican artist Frida Kahlo (1907-1954), who regularly incorporated the flower skull in her paintings exploring the duality of life and death.

While it may seem at odds with the grim reality of the pandemic, the deeper meaning of the Day of the Dead is felt in many communities across many countries. For those who believe and celebrate All Souls in a religious way, the holiday can be a balm, as families pray and remember their dead.

In its more celebratory manifestations, the Day of the Dead rests on the belief that our loved ones who have gone are still always with us – and that we will see them once again when the time comes.

While it can’t erase the grief and pain of losing loved ones, a recurring commemoration such as the Day of the Dead also emphasises the importance of celebrating life. This can certainly be a comfort for those who believe, and should be respected as something spiritually important in their lives.

And in its most colourful incarnation as the Mexican-inspired Día de Muertos, the day celebrates the profound idea that love, memory and family connections live on, even in the face of death.