The city as laboratory 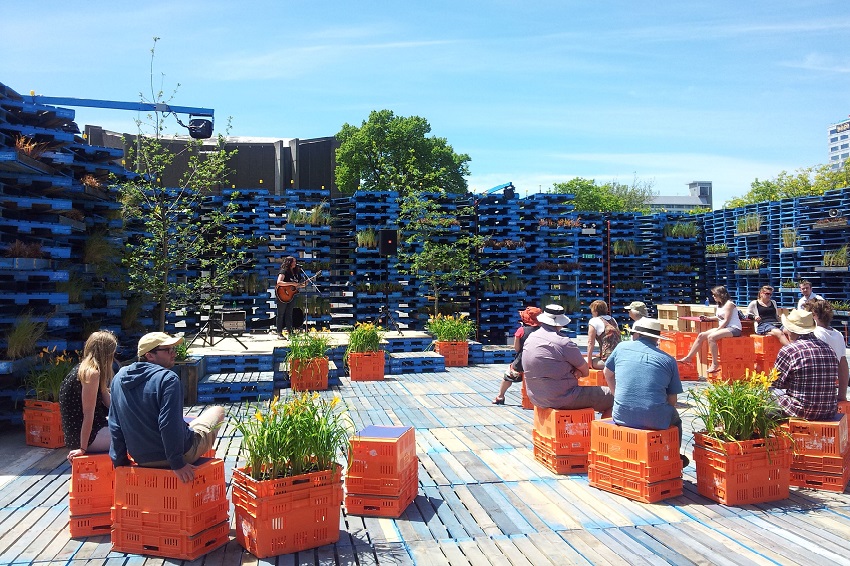 In the aftermath of a series of earthquakes that devastated Ōtautahi Christchurch 12 years ago, impromptu and transitional organisations kickstarted the city’s recovery.

On the many vacant sites in the demolished city, they supported pop-up shops, installations and events to keep city life and urban wellbeing going during the slow post-quake rebuild.

The Commons is now a regular space for markets and events.
Such transitional urban wellbeing efforts are just as relevant elsewhere as cities experience the impacts of climate chaos and wider ecological decline, and are subject to shocks, both acute and chronic.

Cities are under increasing pressure to shift to circular, zero-carbon and ecological living systems to support social, cultural and ecological wellbeing.

Researchers studying urban system change have identified key areas of action for holistic wellbeing. They emphasise the need for swift transitions in urban energy, economic and ecological infrastructures and transport and building systems to foster community and ecological wellbeing – all of which require people to collaborate, experiment and learn.

In partnership with Life in Vacant Spaces (LiVS), a behind-the-scenes organisation that negotiates with landowners to match projects with empty sites, we interviewed some of the people who were involved with the more than 700 transitional projects in Christchurch during the past decade.

Our team visited sites, interviewed project leaders and did archival research – and we co-curated an exhibition and put together a collaborative book.

We found all projects, in some way, led to more socially and ecologically connected communities, a key aspect of urban wellbeing. But we also found a range of other social, cultural and ecological wellbeing outcomes, as well as knowledge about how broader transitions occur. Here are three useful findings.

After the earthquakes, many people identified the need for community connection and spaces for business, art and education. They did not wait to be told what to do but started projects and organisations to address these needs.

Photographer and co-working space operator Hannah Watkinson told us that because she and her friends were young at the time of the earthquakes, they could not help with more mundane recovery operations such as water and sewerage. They jumped in and did what they could to build the kind of city they wanted to live in.

In the shift from acute earthquake recovery to broader urban wellbeing, Christchurch’s transitional organisations have supported collaborative learning and recovery. The city’s rebuild is not simply a return to business as usual, partly because of these organisations and other important transitional partners such as Ngāi Tahu.

Community-led action can be holistic and transformative

While many of the organisations and projects began as earthquake recovery, they were motivated by a vision to transform Christchurch. They were piloting and implementing key urban changes, with many founded on a redistributive circular economy.

A circular economy is one where resources are kept in use for as long as possible, then recovered, reinvested and recycled back into production. Transitioning to these forms of economy requires larger systemic change as well as adjustments in many people’s actions.

In Christchurch, that’s what many projects have been working towards.

Circular and bioeconomy ideas have become increasingly topical as cities begin to calculate the carbon emitted from their landfills, transport, industry and built infrastructures but also encounter wider costs associated with pollution and over-extraction of resources. These LiVS-enabled projects are not just about one thing – they operate with holistic values that include circularity. They model the kind of changes other organisations can make to reduce carbon emissions.

Temporary projects are important for system change because they provide a testing ground for ideas. Social entrepreneurs, artists and visionaries can give something a go to see if it works. Other residents can get used to new ideas in the city.

Bailey Peryman experimented with urban agriculture in a number of projects. The urban farming and composting projects Agropolis, Cultivate and 20:20 Compost each scaled up decentralised community composting another notch, from a single garden bed, to a small urban garden, to a major composting initiative processing significant amounts of organic waste.

Alex Davies’ local food project in a public pizza oven was the basis for his low-carbon Gatherings restaurant.

Kilmore street was the site of many experimental projects in local food, challenging performance art, social networking and more. Some of these temporary projects helped local artists and entrepreneurs go on to do larger-scale transitional projects.

Transitioning cities from extractive to more resilient, circular and ecological systems is a complex, ongoing process. There is no single model emerging from Christchurch that can be exported to other places. However it is clear that collaborating horizontally across communities and governance organisations is necessary for just and effective change.

Examples of this kind of collaborative process include charitable trust Matapopore working with city council and Ngāi Tahu to put mana whenua voices in urban recovery and design, and Burwood residents contributing to new uses for red-zoned land.

As The Green Lab director Khye Hitchcock put it, change requires “a deeper connection with local communities rather than exporting a model […] which may or may not work”.

Genuine community leadership and co-creation is fundamental for transitioning to the more equitable and resilient urban systems needed at this time of change. As we enter into a period of increasing ecological disruption we can take some inspiration from the communities that are already enacting important transitions in holistic urban wellbeing.