My generation has failed young Kiwis 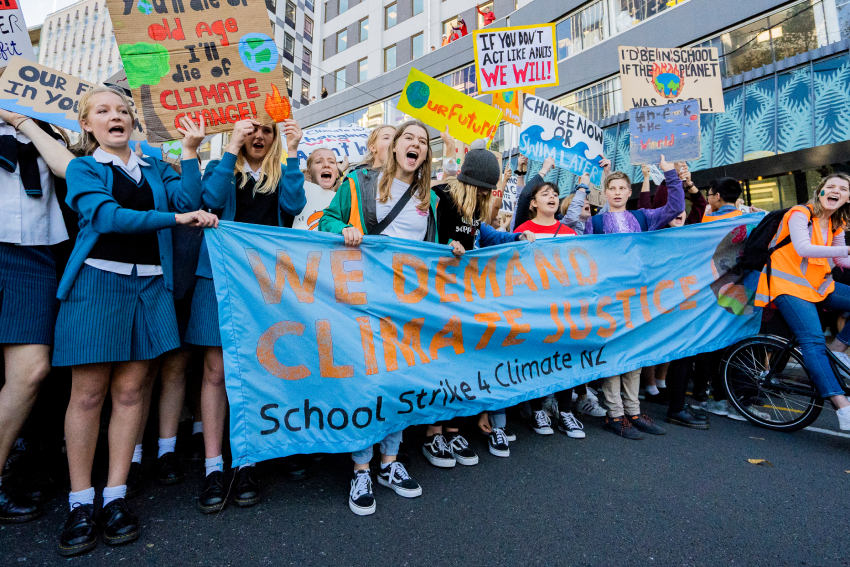 The most significant changes in this country have not come from the top down.

Our environment in Aotearoa has been the focus of some great public political campaigns in my lifetime: Save Manapouri, the South Westland beech forests, Nuclear Free New Zealand, and now the student climate strike, to name a few.

Our former treasury secretary Gabriel Makhlouf claimed he wanted to "put a price on nature". But, that is not why New Zealanders hit the streets – they walk for values, not for prices.

A major issue is that the OECD environmental variables are nation-state dependent, and geographically limited, mimicking GDP.

This means we have to pretend that changes such as the climate of the Antarctic and the accelerating massive loss of ice shelves have no effect on New Zealand, even though they're described by scientists as catastrophic.

At the current rate the frequency of coastal inundations will increase about a thousand-fold. Climate change will bring more storm surges and major weather events, and these will most certainly impact on intergenerational equity, as well creating refugees in our Pacific Ocean.

The ocean itself is being fished beyond the ability to recover, along with 30 million tonnes of by-catch including dolphins, turtles, and sharks. Drift nets and longline remnants kill albatross and whales. Japanese whaling continues.

Moruroa and Fangataufa atolls, where France conducted 193 nuclear tests is leaking material and will eventually collapse. The Great Barrier Reef I was lucky to visit in 1997 is as good as dead.

At Fukushima since 2011 there's more than 1 million tonnes of radioactive water. They are due to run out of storage space in 2022. There is a serious suggestion it is just released into the sea.

For these and many more reasons, I have stopped using the term sustainable. It has been exploited to achieve unsustainable growth in the GDP. Now I use the term "restoration".

In the decades to come, my generation and the one that followed, will be viewed as insane narcissists, selfish, greedy, uncaring, exploitative, full of a sense of entitlement and a disregard for others who come after us.

There has to be some responsibility taken by those whose voices dominate the sound space. There's a need to end the lazy forelock tugging in the direction of the old order.

Don't vote for anyone in the local government elections who says they will curb rates increases. There's a climate crisis; the invoice is decades overdue, and it's time to pay up.

Too many pākehā male commentators need to be called out.

Mathew Hooten wrote critically of the prime minister that the Wellbeing Budget was unconnected to the Treasury's Living Standards Framework. Thank goodness for that. It made sense not to slavishly follow a co-opted framework reinforcing the values that brought us to this crisis.

I cringe every time I hear the plaintive moaning from the farming sector or Todd Muller, the National Spokesperson on Agriculture claiming NZ farmers are not subsidised.

New Zealand agriculture has been massively subsidised all my life, either directly, or through using lakes, rivers and streams as public sumps. When you don't pay for using and polluting water, and heaving half the country's total carbon emissions and nearly 90 per cent of its methane emissions into our air, it is called a subsidy.

To mitigate this, in the next 30 years the arguments rage for farmers to be left unregulated with 'control in farmer's hands', with 'obligations at the farm gate'.

I have a one word reply to that: mycoplasmabovis. Another $800 million in subsidies paid by the rest of us because farmers are too precious to be regulated. Time after time the sector demonstrates it can't be trusted.

Some things though give me hope. The schools climate strike is one of them. I am among those who have failed this young generation.

I am watching the progress of the local government declarations of a climate crisis. To those urging this action I say: just ignore the deniers who say it doesn't mean anything. That was Muldoon's line as council by council declared themselves nuclear weapons free.

We'll have a much better chance of moving a government to net zero carbon emissions by 2030, when we enter an election year with more than two-thirds of our population naming the crisis.