Why call for an emergency when we could call for a revolution? An emergency, after all, puts us on the back foot. "Help!" we cry. It's a plea to authorities to take control of the situation.

A revolution, by contrast, leads on the front foot. It has a vision of a better world and sets out to implement it. From a democratic perspective, it is active rather than passive.

Nevertheless, it is the language of emergency that dominates today. Local and national governments, in New Zealand and elsewhere, are being asked to declare climate emergencies. It contributes to a growing sense of urgency – which is no small thing. But how prudent is it to depend upon the same authorities who at least permitted, and at worst encouraged, the environmental crises that we face?

Auckland Council, for example, unanimously agreed to six commitments. Yet none were binding and five began with the words: "Continue to..." Only the sixth commitment – "include climate change impact statements on all council committee reports" – was additional to business as usual. Must we declare an emergency for such a basic bureaucratic win?

Of course, councillors only did what they had to. With local elections looming and climate anxiety rising, elected officials could hardly afford to say "no" to a climate emergency. But it ought to trouble us that it is so easy to say "yes". These are mostly weightless declarations, promises with which to annoy officials once they've been broken. More troublingly, they risk stealing thunder from more action-oriented initiatives, such as the Auckland Climate Action Framework, currently under development.

Revolutions, on the other hand, promise that "an entirely new story, a story never known or told before, is about to unfold" (in the words of Hannah Arendt). This captures the scale of change that lies ahead.

About 10,000 years ago, our food systems were transformed by the Agricultural Revolution. In the late 18th century, the Industrial Revolution transformed our energy systems. These revolutions produced enormous human value. But by transforming our landscapes and our atmosphere, they also created new kinds of problems.

Our world has already heated by 1C due to anthropogenic greenhouse gas emissions. Since 1750, about one-third of CO2 emissions came from land-use change, mostly deforestation, and two-thirds from fossil fuel combustion and cement production. The IPCC's 2018 Special Report recommends that, to limit additional warming to 1.5C, the world needs to deliver 45 per cent reductions in CO2 emissions by 2030. This requires "rapid and unprecedented societal transformation", roughly at the scale of those earlier revolutions.

And this transition to a low-emissions future is bound to happen eventually, by necessity if not by choice. We can be as confident of this as the predictions of climate science. Humanity will act, either because we choose to pre-empt the worst-case scenarios, or because events will force our hand. What science can't predict is the spirit of this revolution. Here, history is more illuminating - but it should give us pause.

Revolutions are often reckless affairs, upending people's lives in the pursuit of some ideal, then not turning out as planned. Consequently, many revolutions trigger counterrevolutions, which roll back the gains made. From the atmosphere's perspective, this is hardly less dangerous than inaction.

But history is not destiny. Our challenge is to move forward with care as well as haste. Urgency should never be an excuse to suspend our duty of care to others.

The best-known example of this style of thinking is the "just transition", which treats justice, equity and inclusiveness as integral to planning worker transitions from high- to low-emission industries.

Disruption is inevitable as regulations bite, new technologies scale up, and investment patterns shift. But a just transition ushers workers toward new opportunities for creating value, which this revolution – like earlier revolutions – will bring.

This spirit of care is needed across the board: in reimagining our landscapes, designing carbon prices and environmental taxes, enabling change through funding and finance, anticipating the unintended consequences of policy, and honouring the principles of te Tiriti o Waitangi. The low-emissions transition must favour competence over recklessness, relationship-building over scrambling, and responsiveness to the people that it can't help but affect.

Ultimately, revolutions only endure if they enjoy the support of the people. That takes care, both for the world we want to protect, and for the people we're protecting it for. 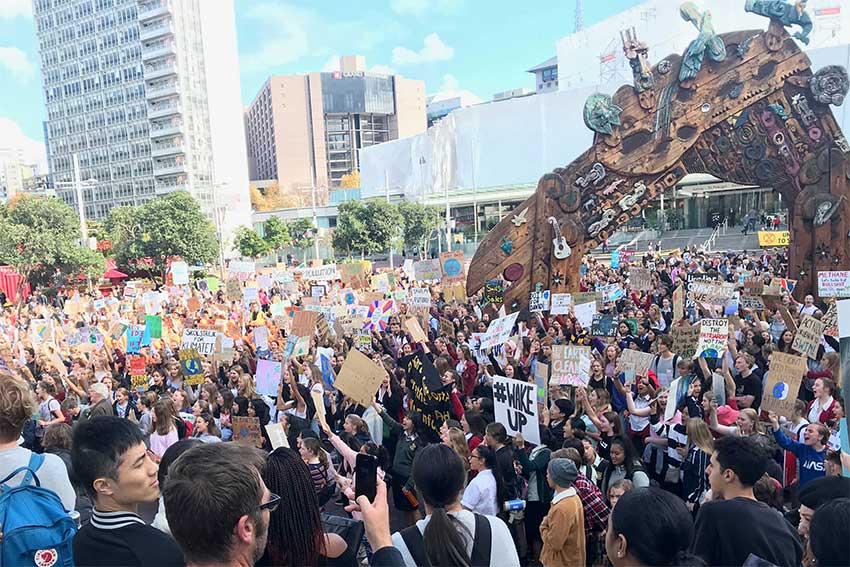 School children protest for stronger climate action in Aotea Square, Auckland, on May 24, 2019.