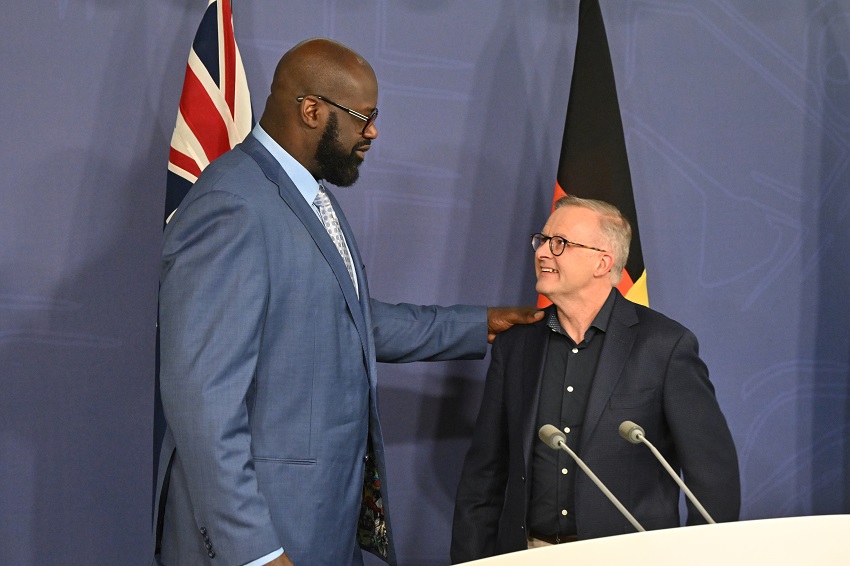 On Saturday, Prime Minister Anthony Albanese met with former NBA star and current TV personality Shaquille O’Neal in Sydney to enlist the sport star’s support for constitutional recognition for an Indigenous voice.  O’Neal voiced his support for changes to the Australian Constitution, but is his voice the right one?

The prime minister claimed O'Neal reached out to him because “he wanted to inform himself about what this debate was about”.

Now O'Neal will be a part of the government’s campaign to change the constitution, recording a 15-second advertisement for free. He is meant to be the first of many stars, including unnamed players in the AFL, NRL basketball and netball organisations, to offer their public support for an Indigenous Voice to parliament.

Whose voice should be heard on the issue?

For many, the selection of “Shaq” as a spokesperson for the Indigenous Voice to parliament is a strange one. O’Neal is well-known for his viral and sometimes problematic performances on and off the court.

During his NBA career, O'Neal built a reputation as an overpowering post presence and a savvy media jokester. In his current job as a sports analyst on the popular television show Inside the NBA, he hosts a popular segment known as “Shaq’tin A Fool,” which features bloopers from recent games.

He has made some foolish decisions himself over the years: his feud with Kobe Bryant filled the tabloids for years, the film Kazaam was a ratings failure, and he has made and apologised for a range of racist or possibly homophobic comments.

Most Americans see O'Neal as a charismatic, even playful, person rather than as an engaged athlete activist. The prime minister claimed O'Neal had done great work in the US around “social justice and lifting people up who are marginalised” but has not followed up those comments with any specifics.

Averill Gordon, Senior Lecturer in Public Relations at Auckland University of Technology, believes the choice of O'Neal will garner widespread domestic and international awareness and support for the Voice to Parliament.

“Athletes are a great way to internationalise an issue as sport and music are key themes used to drive most global PR campaigns.”

“The biggest challenge in a PR campaign is to move the people who are unaware of an issue to become aware,” she said. “Shaquille’s involvement and subsequent communication means people will become aware of this issue and may even become active. It also creates global traction that will feed back to Australia and circulate the message further, adding global interest that will ironically increase Australian awareness.”

She notes the Australian government is addressing a global issue that “affects Australia’s country branding.”

“The (Albanese) government is garnering popular international support to drive a national issue.  By using a US opinion leader, it moves this national issue to be recognised as a common global issue.”

The inclusion of O'Neal in the Voice campaign undoubtedly brings attention to the government’s position, but the choice is still considered an odd one by many. Albanese’s problem is not people’s unfamiliarity with the debate over the Indigenous voice, but rather that few people yet know the proposed language of any constitutional change.

It’s important to also note that O'Neal is not an avatar of the sort of progressive politics that encompasses issues like the Voice. In the increasingly political NBA, players such as Lebron James and general managers like Daryl Morey have opened political firestorms with their critiques of Donald Trump and the Chinese government.

O'Neal has previously been tied to more conservative causes. He is a strong supporter of police and sheriff’s departments across the United States, including in Los Angeles, Miami and, controversially, Maricopa Country, Arizona. Maricopa County’s former sheriff, Joe Arpaio, faced criticism for racial profiling, poor conditions for undocumented immigrants, and eventually received a pardon from Trump following his conviction for criminal contempt of court.

O’Neal’s strong support for law enforcement, despite the Black Lives Matter protests in the United States, might make activists working in the Stop First Nations Deaths in Custody uncomfortable, as it has for many African Americans too.

If O'Neal has become a progressive, the change happened recently, since he admitted in 2020 that he had never voted. In subsequent political commentary, he argued athletes should keep quiet in the press and social media. He told Sports Illustrated:

My thought is that if you are not an expert on it, or if you haven’t been doing it, don’t do it.

So when did he become an expert on constitutional issues in Australia?

The government must also take care that any Voice spokespeople, including O'Neal, do not replace the voices of Aboriginal and Torres Straits Islander people. There is a vigorous debate among Indigenous people about the shape of any Voice to parliament.

Minister for Indigenous Australians and Wiradjuri woman Linda Burney was with Albanese and O'Neal on Saturday. She lauded O'Neal’s efforts, presenting the American with a boomerang made by Indigenous artist Josh Evans and a South Sydney Rabbitohs Indigenous round jersey.

Indigenous politicians from across the political spectrum have illustrated the complexity of this issue in Australia and the unsuitability of O'Neal as a commentator on it. On the political right, Country Liberal Party Senator Jacinta Nampijinpa Price, a Warlpiri woman, said “I’ve no doubt Shaq’s a top bloke but it’s a bit insulting to call on a black American to help with black Australians as if this is all about the colour of one’s skin.” She followed up by calling Albanese’s move a desperate measure.

‘Nothing about us without us’

In fact, there is reason to worry the selection of O'Neal as a spokesperson might overshadow the work Indigenous Australians have done in the sports space already.

In the past, Aboriginal and Torres Strait Islander athletes in a range of disciplines including athletics, AFL and Rugby League have used their sporting prestige to bring attention to Indigenous issues. Albanese could conceivably call on a range of beloved current and retired indigenous sports stars, such as Cathy Freeman, Adam Goodes or Ash Barty, to address this complicated issue.

Many Australian sporting institutions, including the Australian Olympic Committee, already have committees devoted to including Aboriginal and Torres Strait Islander voices. But that would require Albanese to wade into the complexities of Indigenous politics in Australia rather than take advantage of a celebrity from America.

Polling shows many Australians are already supportive of an Indigenous Voice to parliament. Many in the public, as well as in Canberra, are wary of any decision made without appropriate consultation with Indigenous people and without clear language dictating the relationship between the Indigenous Voice and parliament.