AUT scientists have described how a kauri stump is keeping itself alive by holding onto the roots of neighbouring trees; exchanging water and resources through the grafted root system. New research, to be published on July 25 in iScience, details how surrounding trees keep tree stumps alive, possibly in exchange for access to larger root systems. The findings suggest a shift from the perception of trees as individuals towards understanding forest ecosystems as “superorganisms.”

“My colleague Martin Bader and I stumbled upon this kauri tree stump while we were hiking in West Auckland,” says study co-author, AUT’s Associate Professor Sebastian Leuzinger.  “It was odd, because even though the stump didn’t have any foliage, it was alive.”

Leuzinger and co-author Bader, an AUT senior lecturer, decided to investigate how the nearby trees were keeping the tree stump alive by measuring water flow in both the stump and the surrounding trees belonging to the same species. They found that the water movement in the tree stump was strongly negatively correlated with that in the other trees.

These measurements suggest the roots of the stump and surrounding conspecific trees were grafted together, Leuzinger says. Root grafts can form between trees once a tree recognizes that a nearby root tissue, although genetically different, is similar enough to allow for the exchange of resources.

“This is different from how normal trees operate, where the water flow is driven by the water potential of the atmosphere,” Leuzinger says. “In this case, the stump has to follow what the rest of the trees do or else use osmotic pressure to drive water flow, because since it lacks transpiring leaves, it escapes the atmospheric pull.”

But while root grafts are common between living trees of the same species, Leuzinger and Bader were interested in why a living kauri tree would want to keep a nearby stump alive.

“For the stump, the advantages are obvious—it would be dead without the grafts, because it doesn’t have any green tissue of its own,” Leuzinger says. “But why would the green trees keep their grandpa tree alive on the forest floor while it doesn’t seem to provide anything for its host trees?”

One explanation, Leuzinger says, is that the root grafts formed before one of the trees lost its leaves and became a stump. The grafted roots expand the root systems of the trees, allowing them to access more resources such as water and nutrients. They also increase the stability of the trees on the steep forest slope. When one of the trees loses its leaves and stops providing carbohydrates, this may go unnoticed and so the “pensioner” is able to continue its life on the backs of surrounding, intact trees.

“This has far-reaching consequences for our perception of trees – possibly we are not really dealing with trees as individuals, but with the forest as a superorganism,” Leuzinger says.

During a drought, for example, trees with less access to water might be connected to those with more access to water, allowing them to share the water and increase their chances of survival. However, this interconnectivity could also allow for the rapid spread of diseases such as kauri dieback, Leuzinger says.

To better understand how root systems are formed between kauri stumps and living trees, Leuzinger says he hopes to find more instances of these types of stumps and to explore root grafting in intact trees, which will help expand their scope of research.

“This is a call for more research in this area, particularly in a changing climate and a risk of more frequent and more severe droughts,” Leuzinger says. “This changes the way we look at the survival of trees and the ecology of forests.” 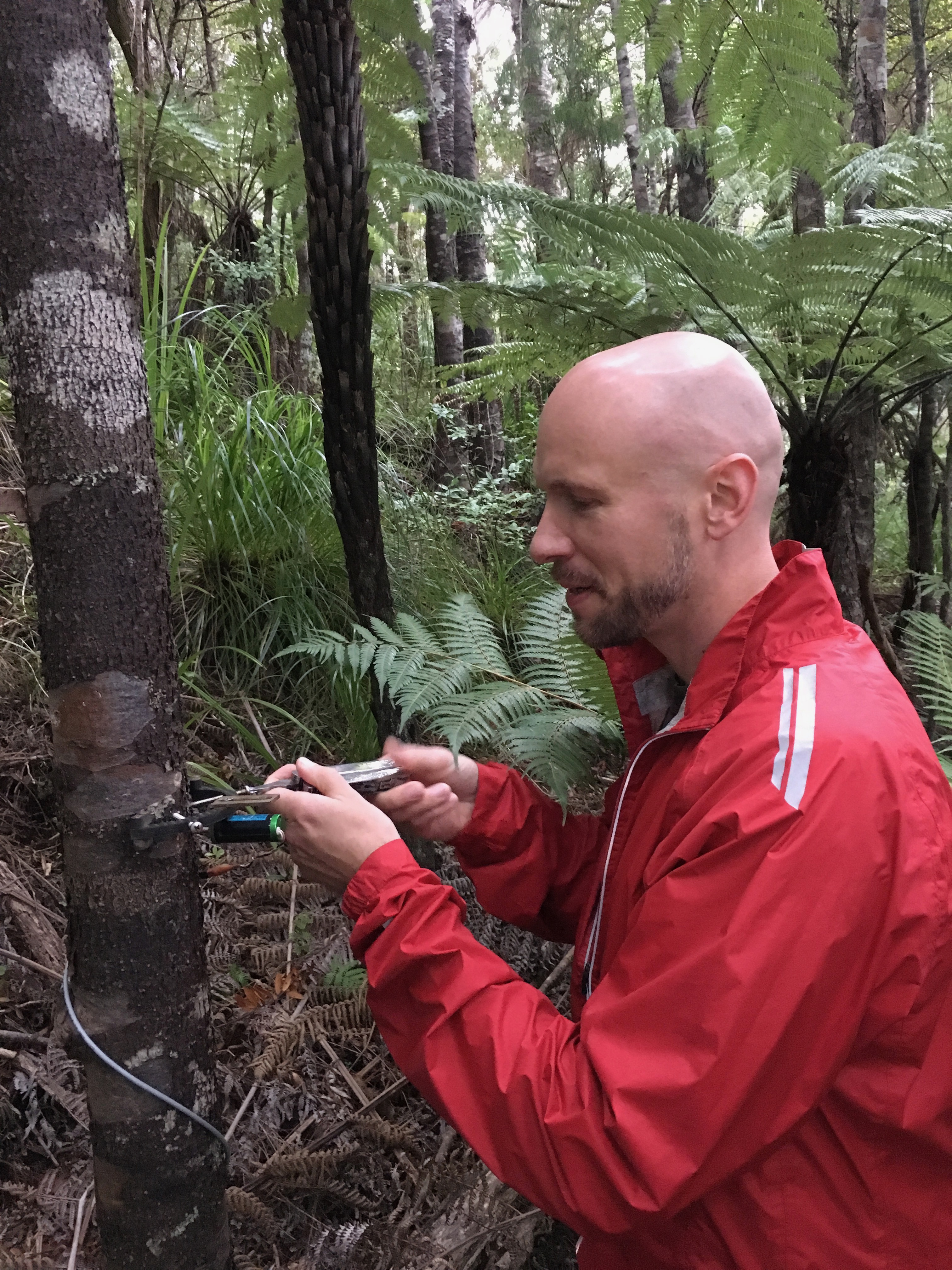 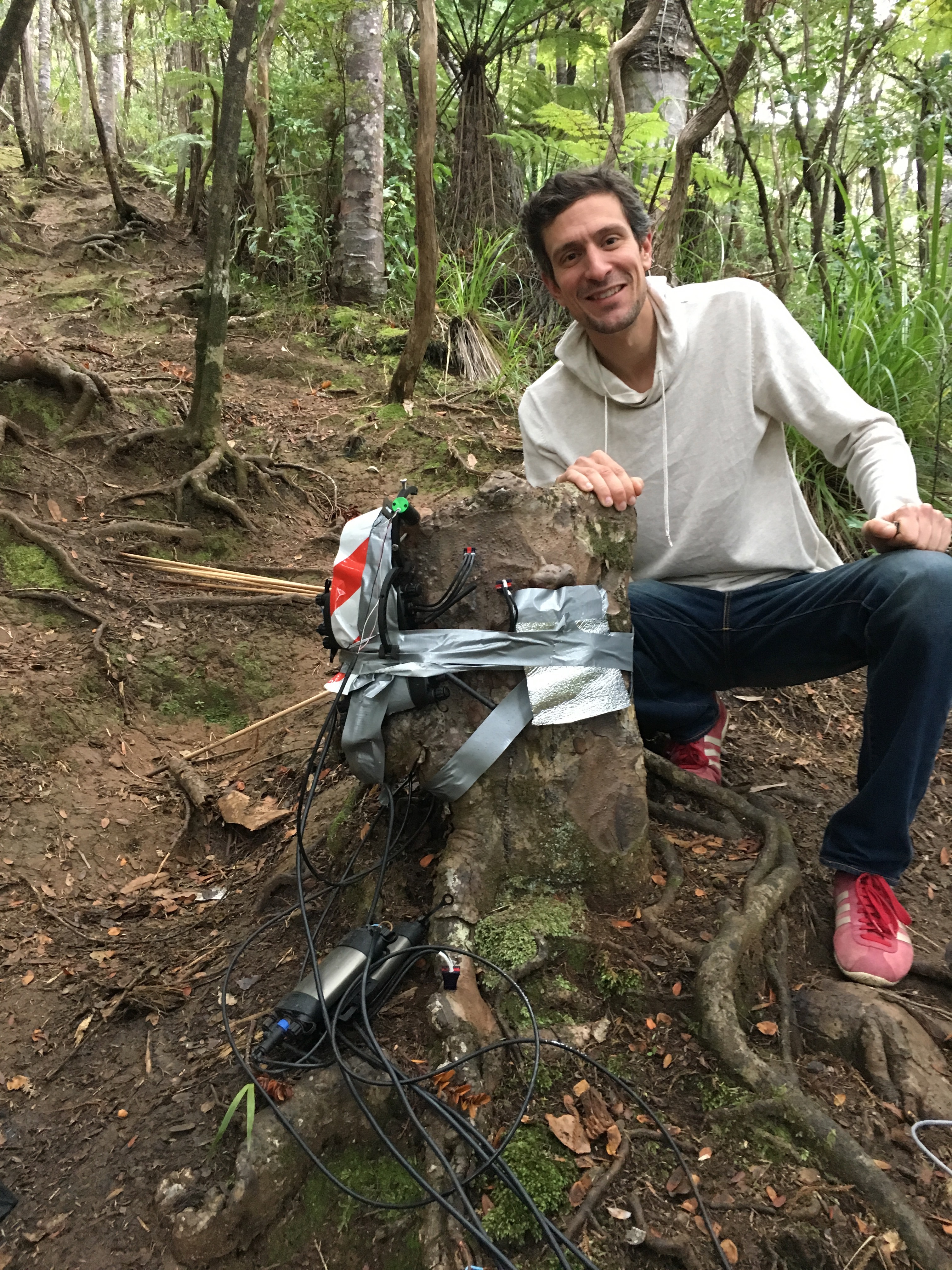