The latest students at AUT's Centre for Refugee Education had a special guest for their farewell ceremony – Prime Minister Jacinda Ardern.

Ardern welcomed the 173 people to New Zealand on World Refugee Day, June 20, as they completed their six-week course before being relocated to homes around the country.

“Jacinda began with ‘kia ora’ and this was responded to with a resounding ‘kia ora’ by the audience of newly-arrived former refugees,” Senior Lecturer Maria Hayward says.

“She then talked about the importance of manaakitanga – the notion of welcome, hospitality, generosity and inclusion – something that we see as integral to our education programme.”

During the ceremony, children performed waiata that they had chosen from songs learned in their English classes, Hayward says.

“Many of the refugee parents have never experienced the ‘normal’ opportunity of watching their children perform in a school event – and were near tears.” 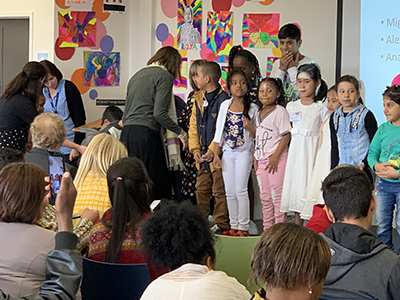 Some of the refugees spoke with the help of interpreters.

“One man talked of having lived for 12 years under blue plastic sheeting in a camp,” Hayward says.

“Others said words were insufficient to express their gratitude to NZ for welcoming them to this beautiful country.”

The prime minister also welcomed relatives of two people who were killed in the Christchurch mosque attacks.

The eleven family members had been in refugee camps after fleeing Syria in 2013, and will participate in the next six-week course at the Māngere Refugee Resettlement Centre, starting in a couple of weeks’ time. 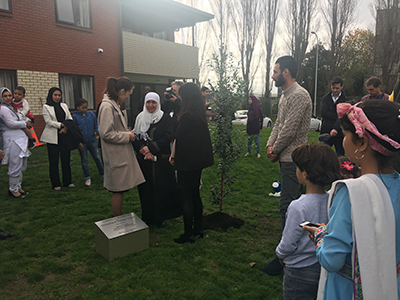 After the main event, Ardern joined them for a small and more private ceremony where they planted a pōhutukawa with a plaque to acknowledge the former refugees and others who lost their lives in the Christchurch tragedy.

“This was an emotional part of the day, with the grandmother tearfully expressing that she missed her son-in-law and grandchild and that she hoped such an event would never happen in New Zealand again,” Hayward says.

“The family members beautifully scooped handfuls of dirt to place around the tree while our kaumatua conducted a blessing. I personally felt so sad to watch this beautiful family – who were so dignified, so strong, and their delightful children who hugged Jacinda and blew her a kiss as she waved to them during the ceremony.

“I’m glad they are here now to join and support their sister and cousins.” 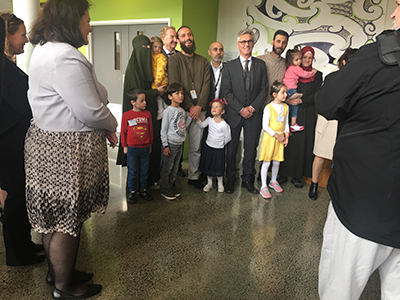 Auckland University of Technology’s Centre for Refugee Education is located within, and contracted to, the country’s Māngere Refugee Resettlement Centre.

“We see our role primarily as being about welcome and manaakitanga. And within this framework, we teach English and inform about living in New Zealand.”

For many refugees the programmes provided by AUT represent the turning point from their traumatic past to a future of hope.

Hayward says all refugees have survived terrible circumstances and have sometimes languished in camps for many years, often decades.

“Nobody chooses to be refugee,” she says.

“Often one or more family members have already been killed, threatened or tortured – so the rest of the family have to flee or suffer the same.”

From mid-2020 the education centre will expand from four classrooms to six to cater for the increase in the government quota scheme from 1000 to 1500 refugees a year.