When it comes to work-life balance and satisfaction with life and careers, it’s women over the age of 55 who are the clear winners.

The Wellbeing @ Work Study surveyed more than 1500 working New Zealander’s about their life satisfaction, job satisfaction and work-life balance. Overall there was little difference among these outcomes when explored by gender, age or ethnicity. Even location had no impact – Aucklander’s are no more, or less, happy than the rest of New Zealand.

But when the data for age and gender was compared, older women emerged as the strong frontrunners. 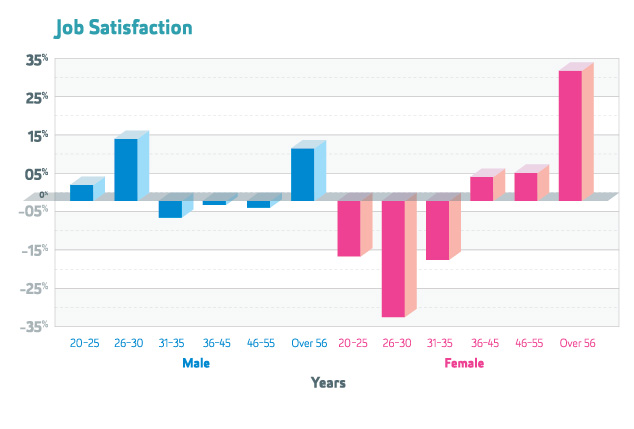 Research author Professor Jarrod Haar says that the results show clear demarcations that were consistent across these three wellbeing factors, with women workers in the 55 years and over age group being the obvious winners.  The results for men were not so clear cut.

Professor Haar states: “The results show that women aged 20-25 years begin their working lives with low life and job satisfaction, and no work-life balance. This likely represents getting to grips with ‘life’ and starting out, possibly with less money and limited assets.

“As women progress these things get better, but are still negative, until the 36-45 age group when they start reporting positive satisfaction and work-life balance. However, as they age, the women in our sample start to flourish with women aged 56 years and above clearly being the ‘winning’ age group. They are soaring! This likely represents having a good job and careers, a comfortable home life, and generally enjoying life” he says.

“For women across all ages, we might consider the effects like a Nike swoosh – it dips down deeply at the start, slowly starts rising, and then the trajectory is strong and upwards,” says Professor Haar. 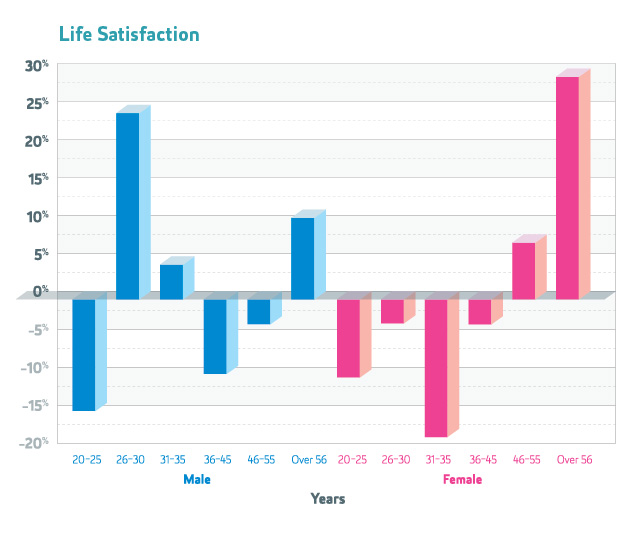 The male group are quite different across all the outcomes. Young men between 20 and 25 reported the lowest life satisfaction – similar to women of the same age. But in contrast to their female contemporaries they report low but positive job satisfaction and good work-life balance.

Things look rosy for the next cohort of men – those in their mid-to-late 20s.

“Male respondents in the 26-30 age group are indestructible – everything is great!” says Professor Haar.

But by 31-35 years of age they “tank” significantly, with low life satisfaction and negative job satisfaction, he says.

“That super work-life balance level evaporates, from +27% down to -11% – a 38% drop. Perhaps this represents reality or maturity and understanding the complexity of things like work-life balance when kids are on the scene.

“Men then stumble along at fairly non-spectacular levels until the 56 year and above age group, where all three factors – life and job satisfaction and work-life balance – all spike strongly – albeit at lower levels than their female counterparts.”

Professor Haar says: “If across time women are like the Nike swoosh, then men are like the Loch Ness monster. A serpent curve of ups and downs until they finally see the light, like Nessie’s raised head, at 56-plus years.”

Produced by the New Zealand Work Research Institute at AUT, the Wellbeing @ Work Study analysed 1563 responses from people working at least 20 hours a week, including 539 Māori, 144 Pacific peoples, and the remaining 880 made up of Asian, Indian, New Zealand Europeans and others. Māori and Pacific peoples in the workforce are an uncaptured voice, but even though the working

Māori population (and to a lesser extent the Pacific population) was over-sampled to get some statistical significance there was no difference in the results when compared with New Zealand Europeans, says Professor Haar.

“This might highlight that a good, paying job is universally beneficial.” 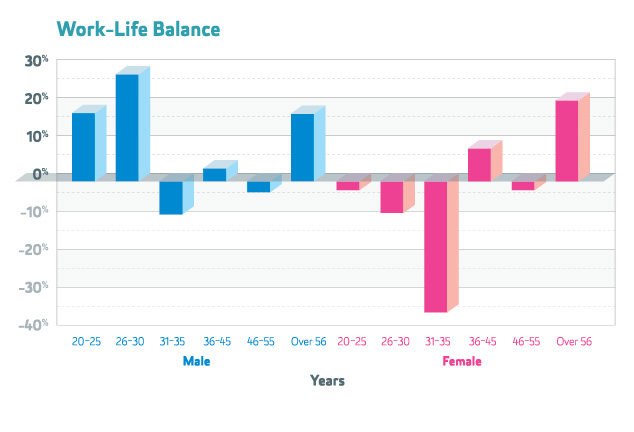