New Zealand is this month competing in two of the world's top culinary competitions in Lyon, France - the Bocuse d'Or and the International Catering Cup.

The teams, with connections to AUT, have been preparing for many months to showcase their skills and compete against some of the best chefs from around the world.

The Bocuse d'Or finale, on January 22-23, is named after the renowned chef Paul Bocuse and is considered one of the most prestigious culinary competitions in the world.

The competition, which takes place every two years, sees teams from 24 countries compete in a gruelling five-and-a-half-hour cooking challenge.

The New Zealand team - Will Mordido, commis Szren Hamberger, Coach Ken O’Connell and President John Kelleher, a senior lecturer at AUT - will compete against some of the best chefs in the world, including teams from France, Sweden, and the United States.

Recent AUT Diploma in Culinary Arts alumnus Stephen Sami has been standing in during practice for the competition-supplied student commis who will help the team on the day. He is a chef at Cassia restaurant in Auckland and is in Lyon to help the team prepare - and as backup to compete.

The International Catering Cup, on January 17-19, is a biennial competition that focuses on the art of catering.

They are one of 12 teams from around the world competing in a series of challenges that test their ability to create delicious and visually stunning dishes in a buffet style, with 16 portions of every item required.

Chefs in the International Catering Cup need to be all-rounders, able to show savoury and patisserie skills for catering purposes.

“With our team based in Australia and around New Zealand, it has been challenging training for the Cup,” Jean Wan says.

“However, everyone took that challenge head on and got on with what needed to be done.” 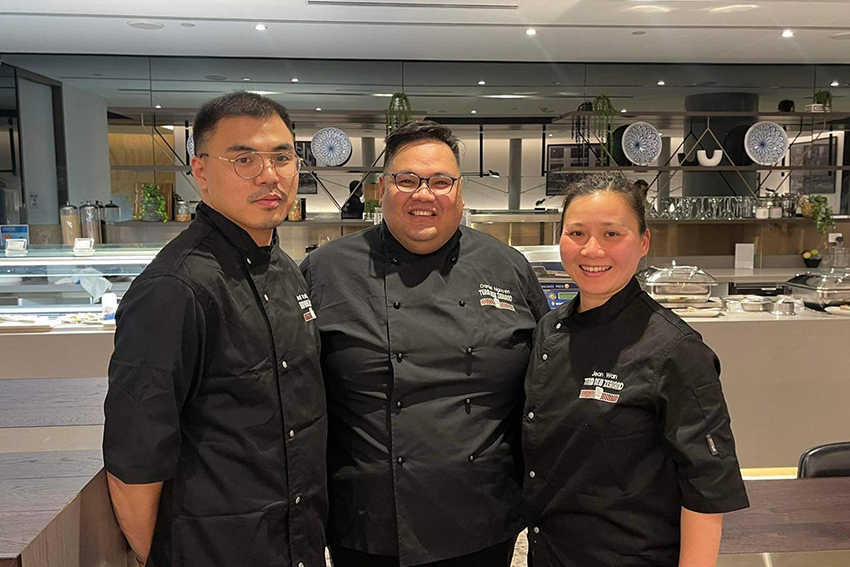 Both events provide a great opportunity for New Zealand to promote its culinary culture and talent on the international stage.

"These competitions are incredibly challenging. To make it to Lyon takes a lot of dedication and hard work,” says Professor Pare Keiha, Dean in charge of AUT’s School of Hospitality and Tourism.

“We are incredibly proud of our staff and alumni as they strive for culinary excellence, and I am sure they will return to New Zealand with great stories and valuable experience.”

John Kelleher says Bocuse d’Or Team New Zealand has been working hard for months and is ready to take on the world.

“There is a unique and exciting culinary culture in New Zealand, and we are excited to share it," he says.

AUT Culinary Arts Professor Tracy Berno says that both competitions are significant opportunities to highlight the country’s culinary talent to the world.

The Bocuse d’Or finale can be watched online, with the New Zealand team starting at 9.18pm NZT on January 22.  The team’s plate theme will presented at 2.13am the next day, with the platter theme being presented half an hour later. The awards ceremony is at 6am, January 24.

The International Catering Cup is also being streamed online. The New Zealand team start at 9pm NZT, January 19, with the first course at 11.15pm, second course the next day at 12.15am, third at 1.30am and the desserts at 2.30am. The results will be announced at 5.30am.