Lawyers, legal scholars, law students and their whānau and families gathered for an evening of good cheer at this year’s AUT Law School Prizegiving.

The event is held annually to recognise the academic achievement of the Law School’s most accomplished students. They are acknowledged by their peers, their lecturers, and by representatives of the country’s most prestigious law firms.

No one could have predicted, said Royden, that the very act of celebrating the prizegiving in person would be remarkable. And yet, as COVID has taken its hold on the world, meeting in a room rather than via Zoom has become a novelty.

Indeed, “remarkable” became the theme of the evening as Royden described the rise of the Law School -  from new kid on the tertiary block to an established leader and thoughtful player in the field of legal discourse in New Zealand – in little more than a decade.

Equally, said Royden, the myriad choices afforded by their degrees help create remarkable futures for AUT Law graduates. Whether they go on to work in education, government, financial or legal sectors, Law School alumni are rich in personal and professional opportunities.

“Law really is the degree of opportunity,” said Royden. “Make the most of it. Enjoy it.”

Finally – and most importantly – Royden commended the students, and the friends, family and whānau who supported their academic journey. From those who were recognised on the Dean’s List to those who received named prizes for scholarship, the students rightly basked in the glory of centre-stage.

In closing the evening, Professor Rickett thanked everyone for their efforts – not just in attending an award ceremony in times of uncertainty, but for the years of hard work and dedication that an AUT Law degree requires. 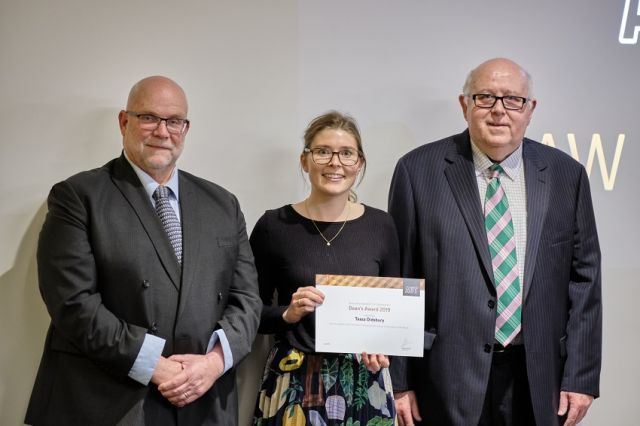