The days of visiting galleries and exhibitions are temporarily on hold. The lost opportunity to get motivation from walking through new spaces and soaking in different works is a void The Big Idea wants to help fill.

Our ‘House Visits’ series takes you into the homes and working spaces of people in the creative world, to see what they have collected on their travels, what it means to them and what they’re using as inspiration inside their own four walls.

I have loitered on the fringes of the Māori screen industry for over thirty years, as a researcher, writer, and occasional performer and commentator. My PhD focused on Māori entrepreneurship in the screen industry, and my thesis was both a written work and documentary.

I am immensely proud to have organised the first Māori film festivals at Auckland University, in 1989 and 1990. In 1996, I was part of a group who set up Ngā Aho Whakaari, the Māori screen guild. And, I have had the great privilege of working with those who first forged our fledgling, but very important Māori screen industry; Don Selwyn, Barry Barclay, Merata Mita, Wi Kuki Kaa, Tungia Baker, Robin Kora, Whai Ngata, Nancy Brunning. All taken too soon, legends who left large footprints for those who follow.

But my greatest pride is in my daughters, who all work in the screen industry, Joss in costume, Mia as a producer and Merenia in continuity/script supervision. They are part of the next generation in the Māori and mainstream screen industry, alongside the offspring of many of my Māori friends and colleagues. We helped foster an industry and these bold, brave millennials will take it to the next level, tribally, nationally and globally.

Life has changed for everyone on the planet. Life is both bigger and much, much smaller, every day assailed with new horrors and idiocy, in equal measure to the tiny acts of kindness, humour and hope that fill the heart and mind with joy.

“It was the best of times, it was the worst of time, it was the age of wisdom, it was the age of foolishness”. We are living through Dicken’s Tale of Two Cities, one city is full of generosity and gentleness, the other is hamstring by venal greed and ignorance. Fortunately, we get to choose which city we will live in.

I have been in lock-down for five weeks because I have Rheumatoid Arthritis (thus, a compromised immune system), am over 65. In early March I hosted my niece from Australia -  she left on the 18th but gave me her cold, so I was tested by my GP on the 20th, cleared on the 23rd, and have been in isolation since then with my youngest daughter Merenia, who is 24.

First I assumed I had it and was protecting others, then realised I didn’t have it, so have been protecting myself. This involves not leaving the house without a mask, gloves, safety glasses,  a hat, overcoat, hand sanitiser, and a bottle of disinfectant. Level 4 will last in this house until the world finds a vaccine!

But life goes on, albeit in a smaller and quieter way. I am still working, preparing online resources for the two classes I teach at AUT, the two postgraduate students I am supervising, and the two research projects I am part of, one looking at Māori leadership and decision-making, and the other focused on Māori and Indigenous networking. 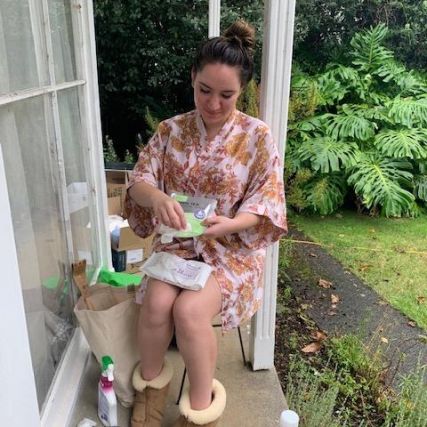 The first photo is Merenia, at our ‘Cleansing Station.’ Nothing comes into our house until it has been thoroughly disinfected, or in the case of vegetables, bathed in water and vinegar. That is our new normal. You may be able to see the feijoa trees in the background, which leads to the second photo. 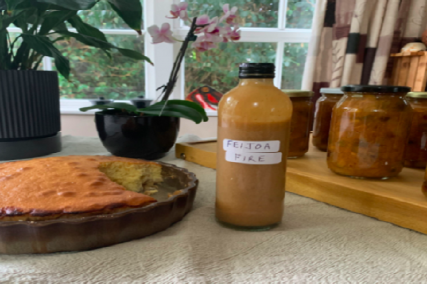 We have been baking up a storm. This is feijoa chutney, feijoa upside-down cake, and my take on hot sauce, Feijoa Fire. Needless to say, these days we need to wear a mask to stop ourselves shoving yet more food into our mouths. It is a malaise I share with many of my virtual friends; as if food and its preparation are the things we have some control over, in a world where we have so little else that we can control. 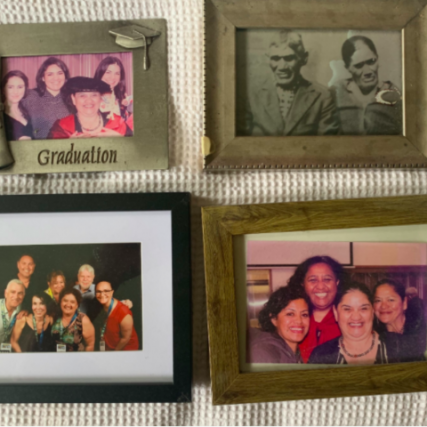 The third photo is actually the four photos I have in my bedroom. Most of my photos are on devices these days, but ones that are special, I print and frame. These are:

Top left: When I gained my PhD in 2012, I celebrated with my three fabulous daughters, from left, Merenia, Mia-Marama and Jossie. They are my heart and soul, and I have been as glad to celebrate my academic successes with them, as to revel in their careers and successes. Mia and Joss live in a flatting bubble in Grey Lynn, so have only seen them twice, when they dropped by to bring food and pick feijoas (which I am sure are an absolute necessity).

Top right: My grandparents, my father’s parents, Paora Henare Mihipo of Ngātikahu ki Whangaroa), and Te Auraki (nee Erihe Walters) of Te Rarawa and Aupouri. These are three of the six tribes of Muriwhenua, the Far North. They died in the 1940s, ten years before I was born, but they are woven into my whakapapa. I know they survived even more unimaginable things, so they give me inspiration every day.

Bottom right: My ‘besties’ who have given the kind of support only girlfriends can give over the last thirty years of births, deaths and marriages, from left, Christina Asher, Whetu Fala. and Eliza Bidois.

Bottom left: Taken at the NZ Academy of Management in December 2019 (which now seems a world away), the members of the Indigenous