Guiding tourism in the Pacific Islands

Tourism to the Pacific Islands stopped dead in the water during the pandemic. With visitors now returning, AUT is helping destinations make better decisions on building back.

The Institute conducts ongoing international visitor surveys (IVS) in 10 countries across the region  delving into who the tourists are, what they do and spend, and how they feel about their experiences.

With cost effective research tools, robust sample sizes and sustained data collection, the research is enabling cost-effective, evidence-based decisions to be made on sustainable tourism recovery.

In the Cook Islands, NZTRI’s research has been running in collaboration with Cook Islands Tourism for a decade now, with NZTRI community attitudes and business confidence surveys also adding to the picture.

With the country’s border open during travel bubbles in 2021, and permanently from the first quarter of this year, albeit only to New Zealanders, the IVS is capturing the first insights into how tourism is recovering.

Professor Simon Milne is Director of the NZTRI. He says that no one knew what was going to happen when the borders opened, however the data that is now coming through shows a different visitor profile to before the pandemic. 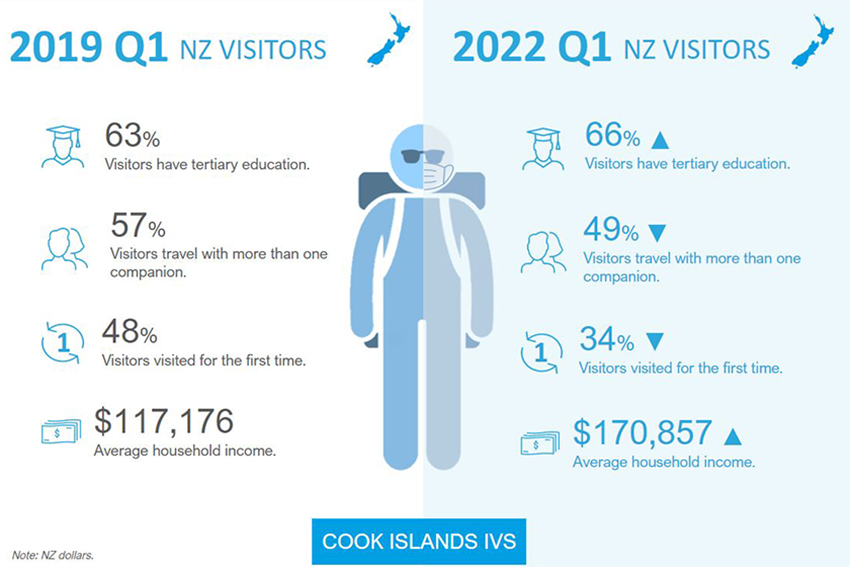 There are two key groups of New Zealand tourists now arriving in the Cook Islands, Professor Milne says. The first are those who call the country a second home, who know it well and have some money. The second are those who would have travelled further abroad were it not for the pandemic, but instead are opting for the safety of the Cook Islands.

In general, tourists now are more likely to have visited before, are older, are more highly educated and are less likely to be travelling as part of a larger group. And although visitor satisfaction is usually high in the Cook Islands, it is now even higher.

Importantly to the country’s economy, visitors are spending 30 per cent more now, on average, than in 2019.

"It’s significant growth in spending and it’s good news for the Cook Islands who have made a shift to a more sustainable vision for tourism development," Professor Milne says.

“The big question though for the Cooks, and indeed for other Pacific Islands and Aotearoa, is to what extent do we just go back to the old ways of simply attracting as many tourists as possible. Prior to Covid, our surveys were picking up signs of over-tourism and tension. Locals were saying it was difficult to find rental housing because of all the Airbnbs, and businesses were saying their main concern was degradation of the environment. The Cook Islands was heading towards 200,000 visitors a year – and it only has a resident population of 18,000.”

How this visitor profile might change over time is difficult to know, Professor Milne says.

“One thing though that will likely change is how New Zealanders feel about travel – some will want to go to long-haul destinations again, but on the other side of the coin some will see multi-leg stopovers as too risky and would rather do a simple short flight to the Cooks. Overally I think spend may drop back a little from the immediate border opening period, but it is still likely to remain significantly higher than 2019.”

A few years ago, the water quality in Rarotonga’s Muri lagoon gained considerable attention, with algal blooms being of particular concern.

NZTRI’s research showed these algal bloom events were having a significant impact on the experience of visitors and local businesses, Professor Milne says.

“We were able to delve deeper and analyse who the tourists commenting were, and sure enough they were the repeat visitors, the highest value visitors. Our data was used to reinforce and justify the policy initiatives that claimed to clean up the lagoon and continue to be used extensively by the Cook Islands National Environmental Service.”

Better water quality is an example of what the research is trying to achieve, Professor Milne says – meaningful outcomes for a range of end-users.

The research is also helping the Cook Islands understand the value of their marine resources. It shows that the tourists who are doing more than just swimming and sitting on the beach, who are diving and doing other more-immersive water activities, are high-value visitors.

“The tourists who are making use of resources that need to be protected - like the reef – are those that spend more. This finding reinforces the importance of looking after those resources.”

Another example of the research making a difference is with the week-long Te Maeva Nui Festival, where people across the archipelago celebrate on Rarotonga.

The issue was that no one knew to what extent the festival was of interest to tourists, Professor Milne says.

So NZTRI worked with Cook Islands Tourism and the Ministry of Cultural Development to identify that it really was a drawcard.

“We found that although the festival hadn’t necessarily brought visitors to the Cook Islands, once they found out about it they wanted to participate. We were able to identify that by encouraging visitors and letting them know about this event we could enable far greater linkages to the local economy and foster greater tourist understanding of and engagement with local culture.”

The NZTRI community attitudes survey has also shown that while both Cook Island Māori and non-Māori are proud to live in a place that attracts visitors, the former are not benefiting as much from tourism.

Knowledge about this issue and its extent gives impetus to initiatives to better spread the benefits of the industry, Professor Milne says.

“Our surveys enable us to understand how different sectors of the economy are linked to tourism and how there may be opportunities to strengthen them.

“It’s been a very powerful tool for the Cook Islands to have three different sets of data – visitor, community and business surveys – that all come together and enable the Government to really work out what’s happening.”

For Professor Milne, tourism research in the Cook Islands has been a personal journey of nearly 40 years.

“The thing I feel proudest about is that I started working here with my master’s thesis in 1984. I was doing very similar work back then, but in a very different way and with far fewer resources. Over time, the research has expanded and developed and the Cook Islands now provides a model of evidence-based tourism planning that other destinations are adopting around the region, from Papua New Guinea to Niue,” he says.

“It’s great to see NZTRI’s research guiding government policy and economic development across the Pacific Islands. We are making a positive impact by linking into and informing national efforts to achieve UN Sustainable Development Goals.”