NASA astronaut and the first mother in space, Dr Anna Fisher visited AUT recently as part of the celebrations of the 50th Anniversary of the moon landing.

Anna inspired the audience at an American Chamber of Commerce breakfast with the story of being in the first cohort of female NASA astronauts. Her journey to space started when she was a self-described ‘maths nerd’ in primary school.

She noted that space exploration needs long term vision, funding and international co-operation but that getting by to the moon by 2024 is doable.

As part of her tour, Anna joined Professor Sergei Gulyaev at the Warkworth Radio Astronomy Observatory to hear about AUT’s contribution to radio astronomy and space travel.

This specialist facility is part of New Zealand’s only Institute for Radio Astronomy and Space Research which partners with organisations such as NASA, ESA (European Space Agency), JAXA (Japan Aerospace Exploration Agency).  Support for space missions such as SpaceX is another key project.

AUT students who study our Astronomy and Space Science papers benefit from the research and expertise of the Institute team and facilities at Warkworth.

“Showing Dr Fisher how AUT contributes to astronomy and space science was a huge privilege.

“Through her more recent work with NASA on project such as Orion, the US-European spacecraft, and the International Space Station, she understands the value of global collaboration, and benefits AUT’s research and graduates can provide to New Zealand and beyond,” said Professor Gulyaev. 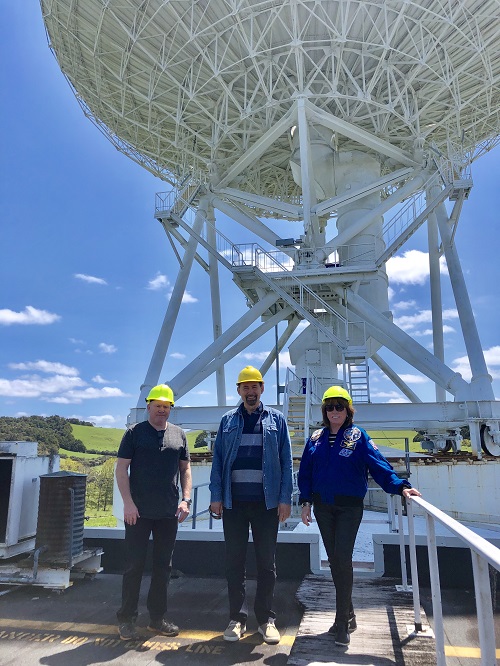