Menu
Home AUT News The making of a university

The making of a university

With more than three decades of service and 18 years at the helm, Derek McCormack is one of New Zealand’s longest serving Vice- Chancellors. Prior to his departure, we asked Derek to reflect on his, and AUT’s, journey.

I joined AIT in 1990, and worked in various executive positions. They were the years we strove to become a university. AIT was the premier polytechnic. It had a great vibe and an outstanding leader in John Hinchcliff who articulated a compelling vision. It felt like a place on the move.

We had 6,000 equivalent full-time students growing to 9,500 over the decade. Many of the students were studying for professions that were lifting their registration requirements to degrees, and during the 1990s several of our big programmes were redeveloped as NZQA-approved degrees.

Looking to the future we saw that more and more AIT students would be studying at a level commensurate with university. A change in the institution seemed inevitable. At first AIT applied to the Minister of Education to change its name to the Auckland University of Technology. That got a “no” on the grounds that to be named a university you had to first be established as one. A five-year process followed to build the case. It galvanised the energies of the institution around it. In October 1999, we celebrated success.

But the feeling inside AIT wasn’t unanimously joyous, and the new university wasn’t welcome in the wider tertiary education sector. AUT was a bit of an ‘ugly duckling’. When it started in 2000 we had only 40% of students enrolled in degrees, the rest in pre- or subdegree certificates and diplomas.

We had little research, a poor library, and woefully inadequate facilities for university work. We’d gone from being the biggest and best polytechnic to the least and most suspect university.

Our next challenge was huge – to re-envision the institution in a way that would both retain the support of our students and stakeholders and at the same time gain new interest. We also had to learn the ropes of the university sector’s structures and funding arrangements. And with no setup grant (we got none) and an already tight budget, we needed to find the wherewithal to build facilities and a resource base that could support advanced learning and research.

Even with our often outrageous confidence, none of us would have believed we could be where we’ve got to today, 22 years later – a worldranked university, second largest in New Zealand, with 95% of our students in degree and postgraduate study, more than 1,000 doctoral students and 750 research active academics whose publications have put us into the world’s top 30 universities for average citation scores. 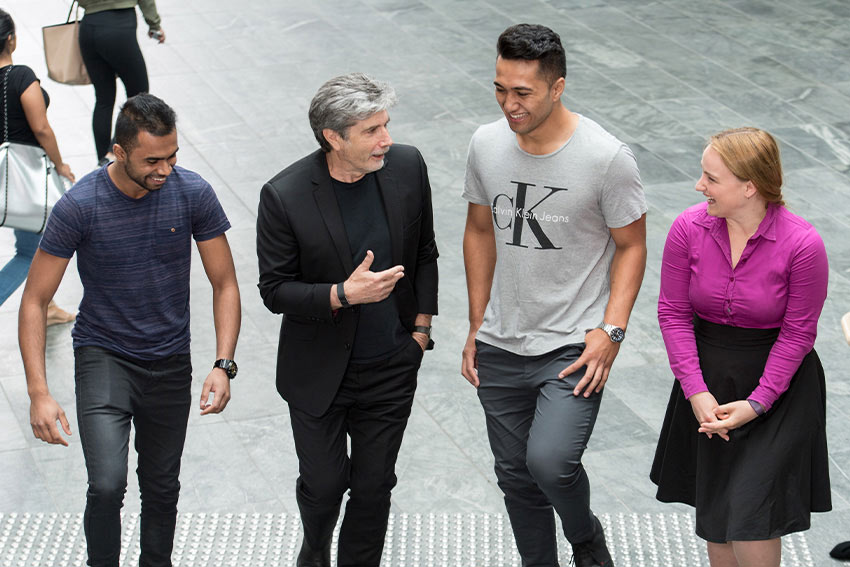 ‘Great graduates’ is AUT’s mission, and we’ve promoted the ‘C-skills’ as one way to develop students. They are the transferable skills that you come away from university with no matter what your major subject was. They are what you need for anything the future will confront you with. The ability to be curious about things, critical in your reasoning, creative in solution building, to be sophisticated in dealing with complexity, to be able to communicate clearly, to collaborate with others and be culturally intelligent. These are the skills essential for the twenty first century and are the essence of a great graduate.

During 18 years as Vice-Chancellor there are so many highlights. We realised that to make our contribution we needed to focus on the emerging university market, and our mission became one of opportunity for people missing out. We deliberately targeted our recruitment to different schools and communities from those universities traditionally had. One expression of that was the South Campus. After years of analysis, lobbying and talking with the community we managed to get Government to support and partly fund the establishment of a university campus in the heart of New Zealand’s youngest and fastest growing population. That early commitment to opportunity was key to AUT becoming the largest university provider to Māori and Pacific students, who’ve grown to become 30% of our domestic enrolment in degrees and postgraduate studies.

Another highlight was the transformation of the physical face of the AUT. We needed to shake off the image of the old ATI and state ourselves with an arresting new presence. The result has been standout facilities and great places and spaces for innovative, person-centred, teaching, learning, research and work.

Some question whether campuses and buildings are as necessary for a twenty first century university. I think they are. The best learning is something interactive and social. That’s most likely to happen in buildings designed to bring people together.

But, amongst the greatest highlights for me have always been the successes of colleagues, students and alumni. I’ve been thrilled when our people win competitions, gain competitive grants, are honoured for their achievements, and so on. It’s kept me mindful that the success of a university is only the successes of its people. And of course, those successes are there in their thousands at every graduation.

My message to our AUT whānau, alumni and friends is an enormous thank you for the chance you gave me to work with you. Keep on being great, and supporting AUT to be a university making a profound contribution.

This story was originally published in Insight, the magazine for AUT alumni and friends. Read the most recent issue of Insight for more stories of groundbreaking research and great AUT graduates who are making a difference around the world.