An AUT patisserie student has won a trip to Samoa for her Matariki-inspired chocolate, and a culinary alumnus scored perfectly in the recent New Zealand Ice Cream Awards.

Ngaa Iwi Kahukoka, who is studying for a Diploma in Patisserie, was awarded the 2022 Youth Cacao Innovators Award at the Pacific Cacao & Chocolate show, in held in Auckland on 23 July.

Contestants had to produce nine identical sweet treats and one dish featuring cacao and chocolate couverture from the Pacific.

Ngaa Iwi Kahukoka says she found out about the competition at the last minute but decided to give it a go, with the chocolate not arriving until competition week.

“For the nine identical sweets, I chose to make some hand-made chocolates with a Matariki-inspired filling.  I mixed our native bush herbs horopito and kawakawa with milk, cream and some duck fat, to create a rich creamy herby chocolatey ganache filling. 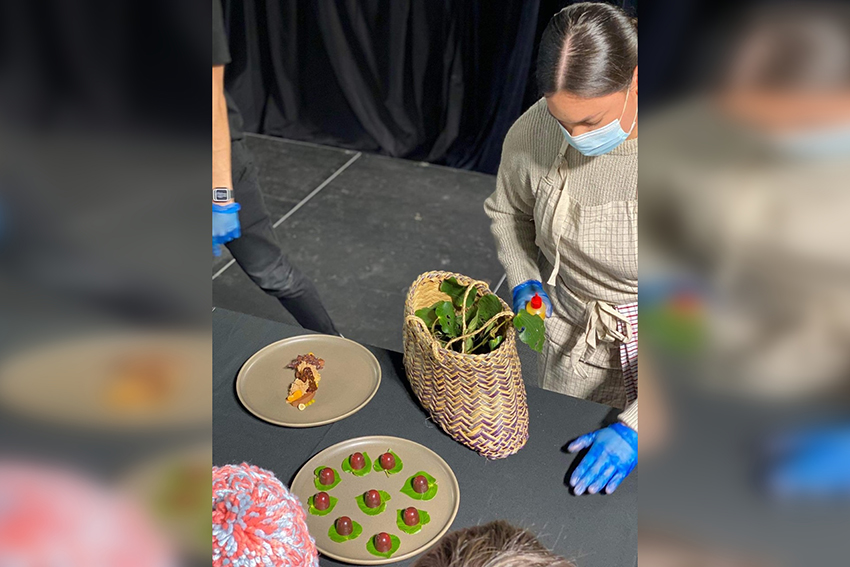 “My second dish was similar to a dish I had created for my final plated dessert assessment using French ‘Callebaut’ chocolate.  I thought that it could be adapted to use the Pacific chocolate.”

Ngaa Iwi says it was a challenge learning how the 76% Pacific cacao chocolate behaved.

"This chocolate when melted is a lot more fluid so you must be careful with your timing. It also sets very quickly so my timing had to be spot on, especially when I was creating my hand-made chocolates.  To get the filling just right I had to play with the recipe over and over, altogether I made 10 versions until I found the one I was happy with.”

As winner of the Youth Innovation category Ngaa Iwi will travel to travel to Samoa, to visit the Cacao plantations and spend a week working with Master Chocolatier Tom Hilton in his chocolate kitchen.

AUT Culinary Arts alumnus Karl Sweet scored a perfect 100 out of 100 for his Mint Choc Chip ice-cream in the prestigious New Zealand Ice Cream Awards on July 24. His salted butterscotch was awarded a gold medal.

Karl Sweet recently graduated from AUT’s School of Hospitality and Tourism with a Diploma in Culinary Arts then moved to The Bay Bar and Brasserie in Taupo to take up his first full-time chef role, where one of his tasks is to make the ice-cream and sorbet.

He says he was trialling and testing out the recipes for months in preparation for the awards.

“Each time I made a new batch with a slight tweak, or improvement, I would get the staff and our customers to give me their honest feedback.

“Even choosing the right type of chocolate to use for my fresh mint-base recipe was a real process.  I tested out three types of chocolate and it came down to a battle between Whittakers and Lindt.  There was only one way to go in the end… it was a mix of both, and it turned out alright.”

The salted butterscotch was a technical challenge, he says.

“I wanted to come up with something a little different from salted caramel, I love the salt but was looking for another flavour to go with it. We have a Butterscotch sauce here on the dessert menu, and I just saw it on the bench one day and said – that’s it.  I had to play around with the salt balance a bit and getting enough really good butterscotch flavour into the ice-cream, once again, I’m lucky I’ve got plenty of keen tasters on hand to give me feedback.”

Young chefs thinking of entering the ice cream awards should keep trialling and testing out their recipes, he says.

“Just take the chance and enter into the competition, I had no idea in the world what would happen.”