Māori carving unveiled at US university

AUT has presented Champlain College with a traditional Māori carving in recognition of their special relationship.

About 180 people attended the blessing ceremony on September 27.

A luncheon was also recently held by the president and staff of Champlain College with past and present exchange students of the two tertiary institutions.

Almost 100 students have participated in the study abroad exchange programme with Champlain College since it started in 2012.

“We are incredibly grateful to know them and look forward to continuing and strengthening the relationship,” Professor Keiha says.

“Te Hononga recognises the importance of the union. Its name means ‘The Convergence’ of waterways and tributaries, of AUT and Champlain, of Māori and Abenaki, where meaningful connections are created – of life, humanity and wisdom.”

The carving was commissioned by Champlain College. 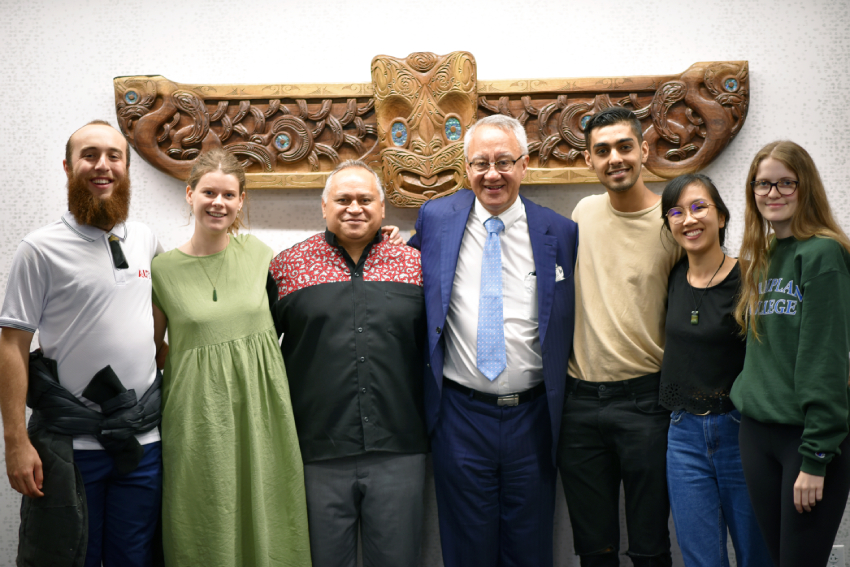 O’Carroll, a kaiako (teacher) at Te Wānanga O Aotearoa with tribal affiliations to Taranaki, carved the lintel out of a black walnut tree wood, which is native to eastern North America, after he and Te Ara Poutama Senior Lecturer Jason King stayed with the First Nations people of the area, the Abenaki.

King says the struggles and successes of Māori are similar to those of the First Nations people of Vermont, mainly the Abenaki – who are yet to be federally recognised in the US.

“The carving was made with hope that Champlain College will consider a carving done by the Abenaki people."

Each year a group of AUT students study at Champlain College in Burlington, Vermont – and vice-versa.

The scholarships are provided by benefactors connected both with Champlain College and New Zealand: Dr George Burrill and wife Dr Lola Van Wagenen, and Emily and Paul Morrow.

A Māori student from AUT also spends time at Champlain College, paid for by the Connor Glassett Memorial Travel Scholarship.

“The relationship is fantastic and provides opportunities for AUT and Champlain students to be global citizens and positive change agents for the future,” King says.

“The students that experience their study abroad come back feeling that things are a lot different in their own countries after spending six months away. They think things have changed, when in fact it is them that have changed.

“Our students return home energised and worldly, realising that their journey of knowledge runs deeper than previously thought.”