After reports of strange noises coming from the wall, The Estates team at the South Campus rescued a 6-week-old kitten from the wall cavity of a study area in MA.

South Campus Maintenance Manager Tony Dormer and his team investigated the space and found a kitten meowing from an air vent of an external wall.

A helpful Paramedicine student who had initially raised the alarm about the sounds, reached into under the external cladding into the air vent and pulled the kitten out.

The student’s paramedicine training came in handy, and a quick check of the kitten’s vital signs confirmed she was in good health.

The team took the kitten back to their workshop, fed her some warm water with honey, and cat food, which she thoroughly enjoyed. 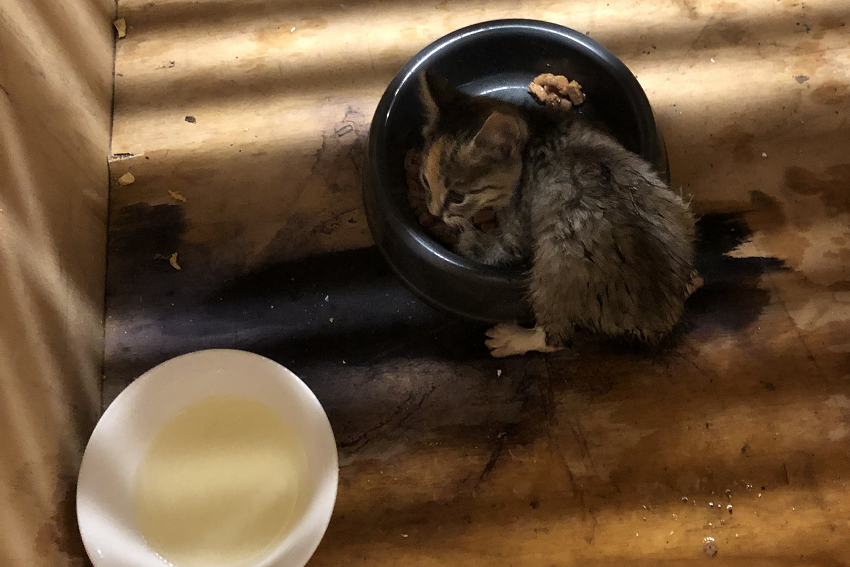 Tony called their frequent cat rescue contact from the Manukau Business Crime Prevention, Tess, who attends to the stray cats on Campus and in the surrounding area.

Tess said the female tabby kitten was about 6 weeks old. She took the kitten to the vet, and she has since found a home with Tess’ sister.

Initially named Tigger by the student who found her, she has since been renamed Sweet Pea, and is settling in well to her new home.

Tony and his team believe the kitten’s mother may have sought shelter and left the kitten behind when she got stuck. They are keeping their eyes out and ears open for further meowing.

“We do get some strange requests from time to time coming through to us at Estates and at first we thought this couldn’t be true however pleasantly surprised to be proved wrong! Everyone involved genuinely had the kitten’s best interests at heart and we were all very happy with the rescue and final outcome,” Tony said.

“Definitely a very cute kitten with a few of us, myself included, thinking about adopting her! Just not sure what my 12-year-old Jack Russell Fred would think! It was a great team effort by everyone involved.”