Professor David Robie, founding Director of the AUT Pacific Media Centre, has announced his retirement from the role and will also be stepping down as editor of the Pacific Journalism Review (PJR) research journal at the end of the year.

When David retired the position of PMC Director was not filled immediately. The standard Expression of Interest process will be followed.

Dr Robie’s retirement was announced at a Pacific journalism and media symposium last week. The event was organised by the AUT Pacific Media Centre and included cross-cultural documentaries, an industry panel on "transition", Pasifika "brown table" initiatives, new research classifications, a forthcoming Asia-Pacific conference, and an Internews project on climate and coronavirus reportage.  The showcase, hosted by MC John Pulu of Tagata Pasifika, also launched the latest edition of Pacific Journalism Review, which is themed on a range of climate crisis and pandemic papers.

Colleagues and students paid tribute to Dr Robie and the contribution of fellow retiree Del Abcede, long-time designer of the PJR. 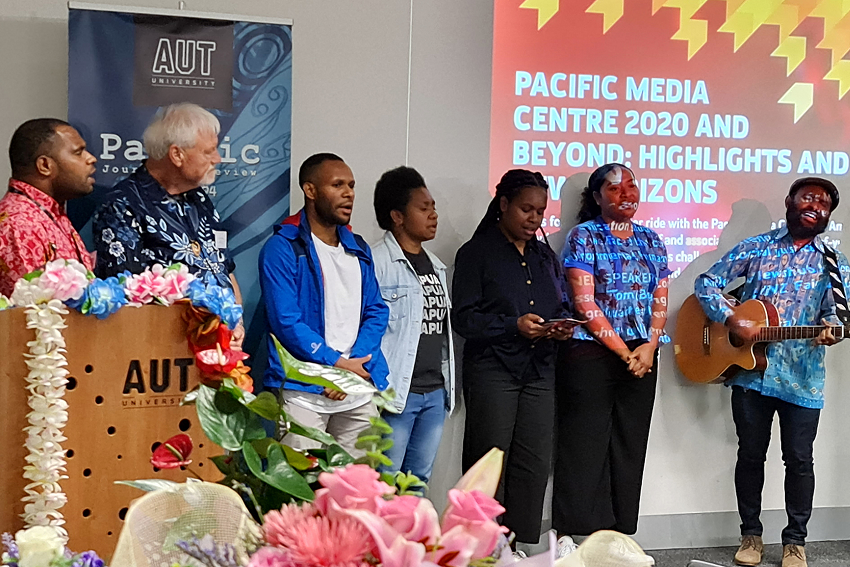 Development studies Professor Emeritus Crosbie Walsh from the University of the South Pacific said, “David has lived in the Pacific, been involved in Pacific human rights and media freedom issues, or taught journalism to Pacific Islanders and others for 40 years. He will be a hard man to replace.” Nicole Gooch from the University of Technology in Sydney said Dr Robie had built ‘a solid pathway for future journalists whilst leaving a huge, indelible mark on the journalism-social-political landscape.’

Dr Robie has been a journalist and teacher for more than 40 years including heading the journalism programme at the University of Papua New Guinea and Head of Journalism at the University of the South Pacific in Suva.  He joined AUT 2002 and became the first PhD in Journalism and Politics at a New Zealand journalism school in 2004 (doctorate at USP) and became founding director of the Pacific Media Centre in 2007. In 2012 he became the first professor in journalism at an NZ journalism school and has been the centre's director since.

Dr Robie is leaving to concentrate on his independent journalism, book and publishing projects.