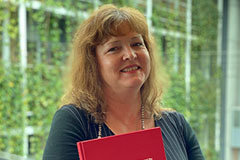 Atakohu Middleton’s examination of the values and practices of Māori journalists working in reo-Māori news, and the influence of tikanga and the language revitalisation agenda on their work, has been recognised as ground-breaking.

The thesis, which required no amendments, saw the markers agree on its importance and originality. One commented, “I hope it becomes a standard reference in media as well as Māori studies”. Atakohu is now employed as a lecturer in the School of Communication Studies.

New Zealand media has taken great interest in Atakohu’s work, and she has been approached by an internationally-known media scholar to collaborate on a book about indigenous journalism.

Atakohu, of Ngāti Māhanga descent and a former newspaper journalist, wrote from a Māori worldview, prioritising indigenous beliefs, language, and culture. She was motivated to pursue her doctorate after finding there was no in-depth research into Māori-language journalism, although there are reo-Māori news shows on TVNZ, Māori Television and Radio Waatea. “I wanted to fill that gap, to make sure that the hard work that’s been done by so many people was validated, recognised and described.”

Now, Atakohu is focusing on disseminating the insights in her thesis. “I’ll be aiming at local indigenous journals because I think it’s really important that Māori research is accessible to the communities that provided the information. We have an obligation to our people to make sure that knowledge is shared,” Atakohu says.

Atakohu says that her doctoral journey “was a wholly positive experience – I really enjoyed it. I did have my moments, but I had really good support.” Atakohu adds that although her name is on the cover of her thesis, “it represents a lot of work by a lot of people who supported me”, among them the journalists who gave her permission to interview them and film them at work, often for days at a time.

Atakohu acknowledges AUT’s support as contributing factors to her achievements. She received a Vice-Chancellor’s scholarship, and said that her supervisors, Dr Helen Sissons and Professor Hinematau McNeill, were always responsive and positive.

Atakohu further praises the AUT Graduate Research School, which supervises doctoral journeys. She says that the school has excellent staff, resources, and workshops. She also wants to send a pīki mihi – or a big thank-you – to her research whānau in MAI ki Aronui, the Māori and indigenous scholars’ network at AUT.

Reflecting on the PhD experience, Atakohu says, “You’re creating new knowledge, nobody has the answers, you’re taking the field beyond what any of you already know."