Artwork for youth, by youth

A group of students from Albany Senior High School have come together to bring an exhibition of children’s artwork to AUT to commemorate Hiroshima Day on August 6 and support our Muslim community.

The team, comprised of Eva Tsai, Serena Chen, Aljames Campo, David Yoon and Briley Thompson say Tūmanako 2019: Children’s artworks for a peaceful world is an art exhibition for youth, by youth. “Our team wants to raise awareness of the dangers of nuclear proliferation and empower youth to take action in the support of peaceful coexistence. Our plan is to display the artworks of children aged 18 and younger and express their dreams of living in a peaceful, nuclear-free world,” says Eva. 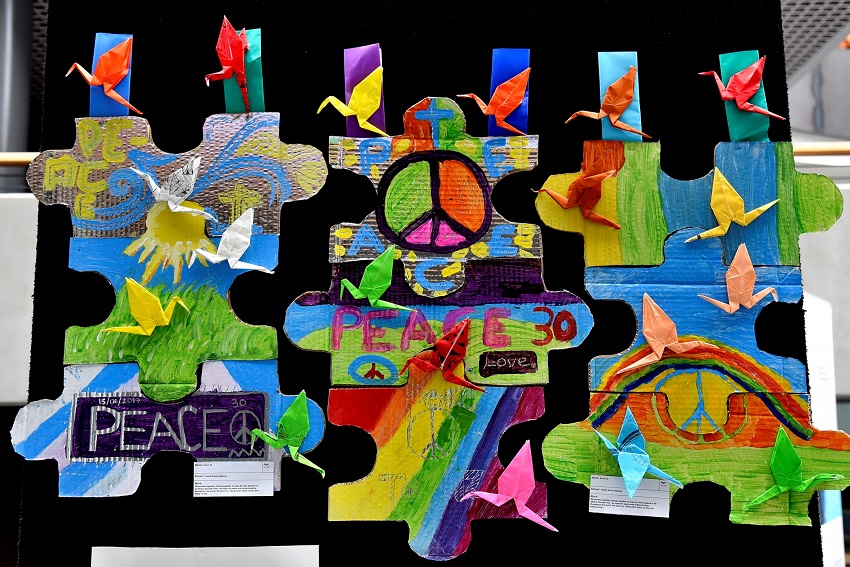 The students were able to work on Tūmanako 2019: Children’s artworks for a peaceful world exhibition through their school’s impact project, which allowed students to spend each Wednesday working towards a project outside of their specialist subjects.

The students say the impact project encourages them to be student leaders with the opportunity to explore their abilities and learn new skills.

The project also gave them the opportunity to work alongside Auckland Libraries, The Peace Foundation, Unicef New Zealand, Roots and Shoots and Soka Gakkai International New Zealand (SGINZ) who instigated the original concept of the exhibition.

“We decided to run Tūmanako as our school project because we felt that as youth, it is important to actively promote and raise awareness around such a relevant issue in our society that can and will impact all of our futures,” the team says.

The team engaged with the Auckland community, reaching out to students and teachers from local schools, and receiving more than 100 artworks to exhibit.

For this third year, AUT has sponsored the exhibit, providing WG as a space to display the artwork, as well as equipment, digital screens, artwork panels and a performance stage.

The opening ceremony will be held at AUT on Sunday 4 August at 2pm in the Sir Paul Reeves building (WG), and the exhibition runs until 11 August.